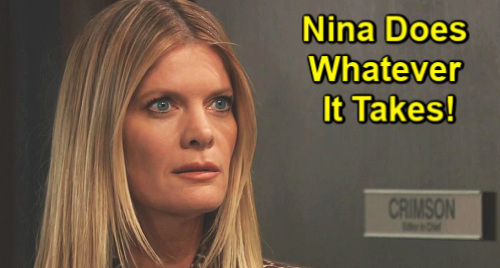 General Hospital (GH) spoilers tease that Nina Reeves (Michelle Stafford) will have plenty of work to do in the coming weeks. She’s eager to impress Jasper “Jax” Jacks (Ingo Rademacher) and show him she’s got what it takes to succeed. In fact, Nina vowed to achieve something quite difficult during their last meeting.

If Crimson can boost circulation, Nina thinks it’s only fair that they should get more money to put back into the magazine. She asked for three months to make it happen, which surprised Jax. That isn’t much time, but Nina isn’t underestimating herself. She’s going all in on this.

However, Nina could have moments were her faith starts to falter. She convinced Valentin Cassadine (James Patrick Stuart) to hold off on their wedding, but a less hectic schedule won’t solve all her problems.

Nina will still have to put forth some serious effort if she wants to achieve her goal – and that’s definitely want she wants. She has no intention of letting Jax think Crimson isn’t in capable hands.

General Hospital spoilers say Nina will prove she’s willing to do whatever she has to do. On June 10, Nina will pay Ava Jerome (Maura West) a visit and butter her up. She’ll resort to flattery and plaster on the phoniest smile she can muster. It’ll be worth it if Ava’s willing to give Nina what she wants.

Perhaps Nina will have some story in mind that involves something at the art gallery. Then again, this could just be about getting Ava to spend advertising bucks. Regardless, it’s intriguing that Ava’s popping up in this hot plot out of the blue. Could there be another deeper reason for Ava’s inclusion in the story?

It’s possible that GH is keeping their options open on Jax’s next pairing. Things certainly seem to be moving toward a Jax and Nina romance right now, but what if Ava enters the mix? She could create a love triangle and make this even more interesting. After all, Ava’s going to need a love interest, too.

If Jax was tempted by Ava, it’d cause loads of drama with Carly Corinthos (Laura Wright) and Sonny Corinthos (Maurice Benard). It’d be worth putting Jax and Ava together for that alone! Whatever the case, General Hospital spoilers say Nina’s fight for Crimson money will bring some hurdles and surprises.

Would you rather see Jax with Nina or Ava? Could a love triangle be in the works? We’ll give you updates as other GH news comes in. Stay tuned to the ABC soap and don’t forget to check CDL often for the latest General Hospital spoilers, updates and news.