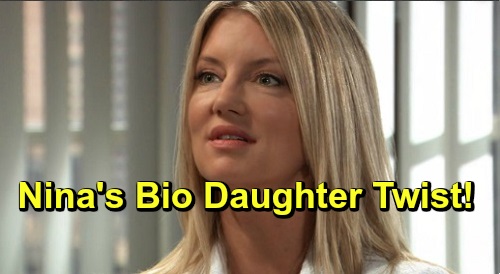 General Hospital (GH) spoilers tease that Nina Reeves’ (Cynthia Watros) biological daughter is still out there somewhere. There’s no way GH would do a fake daughter storyline without the intention of revealing the real one. Who’s Nina’s bio kid and how will she find her? Those are questions the show will have to answer in the coming months.

Of course, Willow Tait (Katelyn MacMullen) has been considered the top daughter candidate for a while now. Willow and Nina got off on the wrong foot thanks to a disagreement over Charlotte Cassadine (Scarlett Fernandez). That led to quite a feud for these two, and there was really no reason for that unless GH was going to do a Willow daughter bomb.

However, we all know stories can change at a moment’s notice. There’s a chance Michelle Stafford’s (ex-Nina Reeves) departure affected things, too. General Hospital seemingly delayed the big reveal so viewers would have time to get used to the new Nina. The move arguably paid off since many fans have praised Watros for delivering some truly heartfelt work.

On the flip side, the delay dragged the storyline out. When people have been speculating about Willow being Nina’s daughter for months and months, it sucks the fun out of the big reveal. Plus, there’s really no reason for Nina and Willow to be related other.

Willow’s made amends with Harmony Miller (Inga Cadranel), so she’s got a mom. Other than the initial shock and move from hate to love, Willow and Nina’s connection wouldn’t really matter. Since we know Willow’s a great gal, she’d inevitably form a relationship with Nina quickly.

What’s the point of going from sweet Sasha to sweet Willow? There wouldn’t be much of a difference between Nina’s real daughter and her fake one. In other words, Nina needs a daughter who’s nothing like Sasha at all. Instead, Nina needs a nasty nightmare of a daughter who’s manipulative and will make Sasha look good by comparison. In fact, that might be the only way Sasha can earn Nina’s forgiveness.

There’s one woman on canvas who’d be perfect. Imagine Nina’s horror if she found out Nelle Benson (Chloe Lanier) was her biological child? Nelle’s up for parole soon, so why not take full advantage of that?

General Hospital fans will recall that Nina and Nelle had a nice bond once upon a time. Nina gave Nelle a job when no one else would. She visited Nelle at GH when she was hospitalized and showed genuine concern for her. Nina hated that Nelle didn’t have parents or any other family to be with her, so she promised to be by her side.

Nina hates Nelle now, but they could argue that Nina was drawn to Nelle back then. She could think it makes sense why she fought for Nelle and wanted to help her. Naturally, Nelle could start up her manipulation again and try to score some cash. It’d be interesting to see Nina handle her psycho bio daughter. Sasha would look like a perfect angel compared to Nelle the ultimate schemer!

Do you think GH should shift gears and go with Nelle as Nina’s child? Do you think they’ll take the predictable route and make Willow the real daughter instead? General Hospital spoilers say some intriguing developments are brewing, so stay tuned. We’ll give you updates as other news comes in. Stick with the ABC soap and don’t forget to check CDL often for the latest General Hospital spoilers, updates and news.