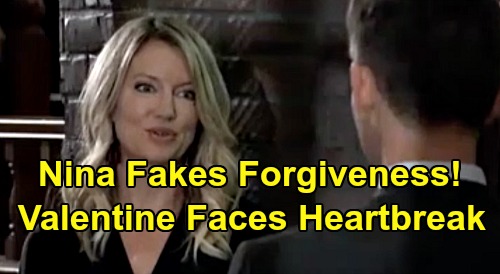 General Hospital (GH) spoilers tease that there may be another explanation for Nina Reeves’ (Cynthia Watros) bizarre decision. Sasha Gilmore (Sofia Mattsson) told a very flimsy story that absolved Valentin Cassadine (James Patrick Stuart) of guilt. She assured Nina that she acted alone and duped Valentin right along with her.

Of course, it was easy to see Sasha was covering for Valentin. She appeared nervous as she stammered through the whole thing. Sasha managed to come up with answers, but it certainly seemed like she was making up as she went along. There’s no reason why Nina should take the word of her lying fake daughter or lying Valentin either. GH fans know Valentin has deceived Nina time and time again.

Valentin seemed to play Nina like a fiddle, but is that really what happened? Could Nina be the one playing Valentin instead? It’s definitely a possibility to consider. Nina was devastated after the truth about Sasha came out. She was initially convinced that Valentin had to be involved – a logical conclusion!

Who else could pull off a plan this elaborate? We’re talking about not one, not two, but three altered DNA tests. Valentin even tricked Curtis Ashford (Donnell Turner), a skilled private investigator. This whole thing was way out of Sasha’s league, so perhaps Nina realizes that.

Nina looks like the biggest fool alive, but she may be smarter than people are giving her credit for. Could this be Nina’s revenge plot? What better way to get payback than to set Valentin up for a huge fall? Maybe it’s not enough for Nina to just dump Valentin. She might want to twist the knife by making him think they’ll have their happily ever after. Furthermore, Nina may be giving Valentin just enough rope…

Valentin has a habit of wiggling out of trouble. Nina might be scheming to make sure Valentin truly pays the price for this. She may be counting on Sasha to eventually rat Valentin out – with a little help from Michael Corinthos (Chad Duell) if need be.

Regardless, Nina’s vengeance is pretty much the only way to salvage this storyline. Let’s hope she’ll lower the boom! Otherwise, General Hospital is just dragging this out unnecessarily. The big reveal would basically just be a repeat. It makes sense to include a twist here and have Valentin get duped for once.