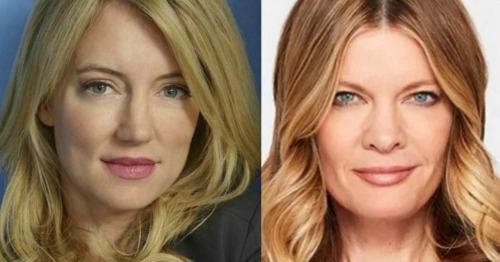 General Hospital (GH) spoilers reveal that some unreliable sites out there have the wrong info regarding the upcoming Nina Reeves transition. Michelle Stafford will be passing the Nina baton to Cynthia Watros, but there’s clearly been some wrong speculation about how it’ll all go down. For starters, let’s address the timing of the Nina swap.

Some sites would have you believe there could be weeks of lag time between Ninas, but it certainly doesn’t look that way. GH obviously worked hard to find a new Nina ASAP. They did that so Watros could slide right in when Stafford’s contract wraps up next month. There’s no official word on Stafford’s last date of filming, but it makes sense that she’ll go until the end of May.

We also know Watros starts shooting in early June, so that hints at a smooth and easy change. This could be as simple as Stafford filming the last week of May and Watros filming the first week of June, which means there’s no need to fret about not having Nina around. General Hospital isn’t going to yank Nina out of her major storyline, which is about to heat up.

There’s also been some car accident and coma talk out there, but that’s just pure speculation at this point. If Nina did end up in a coma, it would be brief. It also wouldn’t be to provide a plastic surgery excuse like some sites suggest.

Why would Nina need that when Watros somewhat resembles Stafford? They don’t look exactly alike, but they’re most certainly close enough. Furthermore, we’re not dealing with years in between the two versions of the character, which is usually when soaps opt to take the plastic surgery route.

Briana Nicole Henry jumped right in as Jordan Ashford after Vinessa Antoine departed. The same thing happened when Tajh Bellow took over for Tequan Richmond as T.J. Ashford. Recasts are an accepted part of the soap world. The Stafford and Watros swap has been widely publicized, so everyone knows it’s coming. There’s no point in overcomplicating what will be a simple switch.

General Hospital spoilers say Nina will face serious daughter bombshells thanks to Valentin Cassadine’s (James Patrick Stuart) deception, so that’s where the real shockers will come in! We’ll give you updates as other GH news emerges. Stay tuned to the ABC soap and don’t forget to check CDL often for the latest General Hospital spoilers, updates and news.