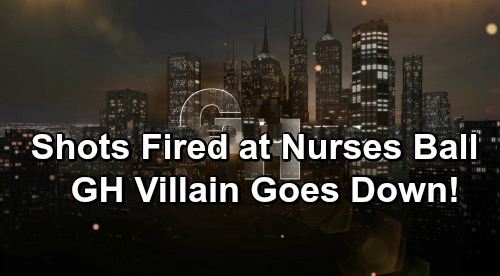 General Hospital (GH) spoilers tease that a shocking shooting is coming up. During the week of May 20-24 featuring the 2019 Nurses Ball, shots will be fired and chaos will erupt. Which GH character could potentially take a bullet? Who will be the one to pull the trigger? Could this even be a shootout between multiple characters? It sounds like one storyline could come to a bloody conclusion – or least end one horrific chapter.

There are certainly a few story options here. Ryan Chamberlain (Jon Lindstrom) is an obvious contender for the person being shot at – hopefully by Ava Jerome (Maura West). However, Ryan could also have a gun himself. That wasn’t his weapon of choice in the past, but it might be a better fit for him now that he’s only got one hand to work with.

Regardless, it’s easy to imagine Ryan taking a bullet and ending up gravely injured. There’s a good chance one of Ryan’s kidneys will be donated to Jordan Ashford (Briana Nicole Henry), so this could put Ryan at GH for that. General Hospital has to have some way for this to all come together, so Ryan getting shot fits the bill.

Then again, Shiloh Archer (Coby Ryan McLaughlin) could also find himself in serious danger. That’s because Sam McCall (Kelly Monaco) will lose control of her con. Her cover may be blown, which could put her at risk. GH viewers know Jason Morgan (Steve Burton) would do anything to protect Sam. He’ll inevitably step up for his love and stop Shiloh from hurting her in any way.

Will Jason have to fire a few shots in the process? We know Shiloh will land at GH before long. He’ll be roughed up and will have a sling on, so a bullet might hit his arm or shoulder. If not, it looks like Shiloh will at least take a beating from Jason or someone else close to the situation. Even if a bullet doesn’t actually hit him, Jason could still shoot at Shiloh. He might intend to cause a diversion or use this as a scare tactic.