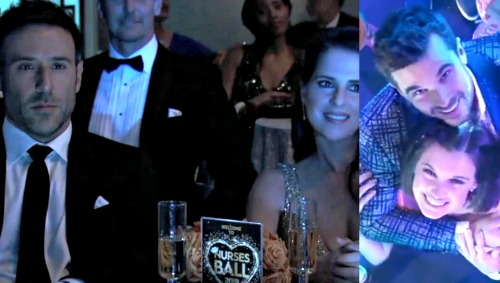 General Hospital (GH) spoilers reveal that we’ve got a first look at a hot Nurses Ball performance. At last year’s big shindig, Harrison Chase (Josh Swickard) wowed the crowd with his version of Portugal. The Man’s Feel It Still. Chase is hoping to outdo himself at 2019’s Nurses Ball and he just might pull it off!

GH couldn’t wait to give fans a taste of what Chase has to offer. They posted Chase’s performance early, so we’ve got a sneak peek at what’s to come. Chase picked another great song this year. He’ll be singing Something Just Like This by The Chainsmokers and Coldplay. It looks like Josh Swickard had a blast belting out this tune for Chase’s part in the show.

General Hospital spoilers say Chase will even do some dancing in hopes of entertaining the guests. Naturally, Willow Tait (Katelyn MacMullen) will watch proudly in the audience…until Chase invites her up on stage! Willow will try to refuse, but Chase will want to show off his lovely girlfriend. She’ll ultimately cave in, so they’ll strut their stuff in front of everyone before sharing a passionate kiss.

This performance can be described in one word: adorable. “Chillow” fans should love every second and so should Nina Reeves (Michelle Stafford). This will hopefully convince her that Willow hasn’t made Michael Corinthos (Chad Duell) her prey.

Of course, GH viewers can still expect conflict between Nina and Willow at this event. When they’re in a room together, they’re going to clash. That’s just the way it is! However, the performance will go smoothly and leave everybody in the room delighted for the happy couple – everybody except Shiloh Archer (Coby Ryan McLaughlin).

Shiloh won’t be pleased at all as he watches next to Sam McCall (Kelly Monaco). He’ll keep his anger under control, but it’s clear that he’ll be raging on the inside. Will Chase’s sweet gesture backfire? He just wanted to spread some love at the Nurses Ball, but this could provoke Shiloh in a big way. Since Shiloh thinks of Willow as his property, he may rev up his efforts to bring her back to DoD.