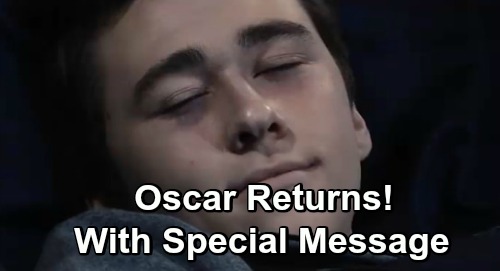 General Hospital (GH) spoilers tease that death can’t keep Oscar Nero’s (Garren Stitt) storyline from continuing. This teen has more to say and he’ll get his chance on May 13. GH has another important episode in store for Oscar and his loved ones. It’ll be a time to come together, mourn and even celebrate in some ways.

It looks like this is when Oscar’s memorial service will be held, but that won’t be the only item on the schedule. General Hospital spoilers state that Oscar will have a full day of activities planned. It seems he left some directions behind for his friends and family members. Perhaps it was Oscar’s way of making sure they didn’t give him some doom-and-gloom funeral.

Oscar understood how tough his death would be on everybody who knew and loved him. However, he also didn’t want it to stop them from living their lives and moving on. Oscar’s memorial episode could be the first step toward healing.

Dr. Kim Nero (Tamara Braun), Drew Cain (Billy Miller), Josslyn Jacks (Eden McCoy) and everyone else connected to Oscar will still be stuck in grief, but closure could be a big help. Oscar can provide that through his video message and the instructions he left for them. It’ll help with accepting the reality of the situation and remembering what Oscar really wanted.

GH spoilers say Kim will be a mess of emotions all day, but she’ll have Drew and Julian Jerome (William deVry) to lean on. Drew will also honor Oscar’s wishes by uniting with Jason Morgan (Steve Burton) somehow. Oscar might even put them to work on some special task. He was really hoping they’d start acting like brothers, so this May 13 episode will bring a great opportunity.

Over with Sonny Corinthos (Maurice Benard), he’ll argue with Ned Quartermaine (Wally Kurth) over something. It’s possible Ned and Jason will clash, which could lead to Sonny and Ned clashing, too. Oscar’s will might be at the center of the conflict. Then again, it’s also possible Ned’s plans will bring more pain to Josslyn. That’d be another reason for Sonny to step up and fight for what he feels is right.

Other General Hospital spoilers state that Cameron Webber (William Lipton) will rise to the challenge. Despite how hard it’s been to cope with his grief, Cam might decide to say a few words at Oscar’s memorial service. This might involve that video message as well. Cameron was undoubtedly asked to handle any necessary details, so he won’t want to let Oscar down.

Garren Stitt will obviously make an appearance through the video, which will finally be seen in full. Let’s hope we’ll see a content, glowing Oscar nearby, too. It’d be fitting for him to pop up and watch his loved ones at some point. Maybe Oscar will witness a moment of joy he brought thanks to his orders. This will still be a somber day, but at least Oscar will manage to offer his loved ones some peace.