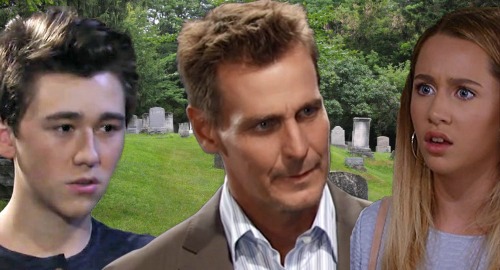 General Hospital (GH) spoilers tease that Carly Corinthos (Laura Wright) will decide to do something significant for Josslyn Jacks (Eden McCoy). Oscar Nero’s (Garren Stitt) brutal episode on the bridge was his worst one yet, so he’s bad shape. Even though he’ll come out of his coma and get a chance to say goodbye, the end is rapidly approaching. Joss will be a total mess, so Carly will need some backup.

GH fans can expect Carly to make a phone call soon enough. She’ll summon Jasper “Jax” Jacks (Ingo Rademacher) to come support his daughter in Port Charles. Carly will feel like Joss needs both her parents close right now. The more love she has around her, the better off she’ll be. Losing Oscar will be one of the toughest ordeals of Josslyn’s life, so she’ll need all the comfort she can get.

Naturally, Jax will hop on a plane and come as quick as he can. He won’t want Josslyn to suffer without her dad by her side. General Hospital spoilers say Joss will feel a little better about things with Jax in town. He can’t take away her pain, but he can make it more bearable. That’s the best Joss can hope for since Oscar’s death is inevitable.

After Oscar passes away, Joss will need Jax even more. The reality of the situation will hit her hard, so she’ll struggle to find a new normal and adjust to her life without Oscar. Joss will have other family members and friends to lean on, but Jax’s encouragement will be particularly crucial. She’ll appreciate being able to catch up and get some reassuring hugs from her dad in the weeks ahead.

General Hospital spoilers say Carly will be grateful to Jax as well. She’ll let him know this means a lot to Josslyn and hope he can stick around for a while. Carly will certainly mention her pregnancy at some point. You can bet the news will throw Jax for a loop! That’s something no one saw coming, especially not Carly and Sonny Corinthos (Maurice Benard).

It sounds like Jax’s upcoming stint will include plenty of drama. We’ll give you updates as other GH details emerge. Stay tuned to the ABC soap and don’t forget to check CDL often for the latest General Hospital spoilers, updates and news.