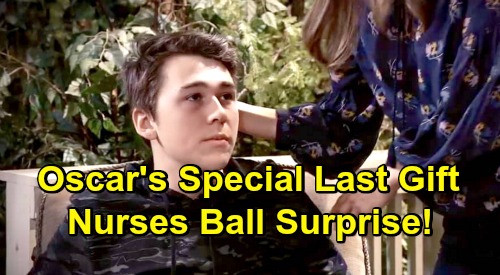 General Hospital (GH) spoilers tease that Josslyn Jacks’ (Eden McCoy) dream probably won’t come true. She’s been working on a song with Oscar Nero (Garren Stitt) in hopes of performing it at the Nurses Ball. However, Joss understands it’s not likely that Oscar will survive that long. Even if he did, Oscar would be in no shape to get on stage and sing with Josslyn.

Nevertheless, this is giving Joss and Oscar something else to focus on. They can’t sit around all day and think about Oscar’s imminent death. That’s just too heartbreaking and wouldn’t help them make the happy memories they need to be making. Working on this song will not only provide a distraction, it’ll leave Joss with a little piece of Oscar she can always carry.

What about Oscar though? Could there be something in this for him as well? It wouldn’t be surprising if Oscar’s loved ones did something special for him as his demise rapidly approaches. Once they realize Oscar’s final hours are drawing near, perhaps Joss and Oscar’s family members will throw together a substitute Nurses Ball at the Quartermaine mansion.

It wouldn’t be anything fancy, but Joss could at least perform the song – even if Oscar’s too weak to sing along. Then again, General Hospital might save that song for the actual Nurses Ball. It’s easy to imagine Joss getting up there to sing it in Oscar’s memory. She would undoubtedly break down in tears toward the end.

Josslyn is trying to be brave and that trend will continue, but she’s not as tough as she looks – at least not when it comes to her boyfriend’s death. Oscar’s passing will leave Joss feeling lost and alone, but her friends and fam will step up to help. That includes Carly Corinthos (Laura Wright), Jasper “Jax” Jacks (Ingo Rademacher), Cameron Webber (William Lipton) and so many other concerned characters.

GH has already delivered plenty of heartbreaking scenes, but there are far worse ones coming up. General Hospital spoilers say Oscar’s sendoff will be devastating, so fans had better be prepared for all the sorrow! We’ll give you updates as other GH news comes in. Stay tuned to the ABC soap and don’t forget to check CDL often for the latest General Hospital spoilers, updates and news.