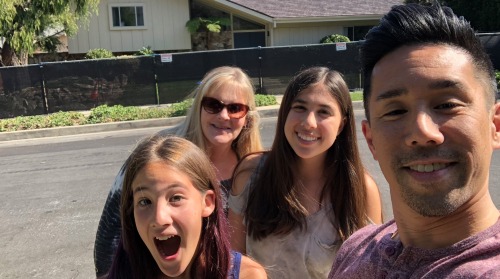 General Hospital (GH) spoilers reveal that one ABC soap star is celebrating a big milestone. GH fans know Parry Shen as Brad Cooper in Port Charles. Brad’s clearly headed for some romantic woes since he’s been lying to Lucas Jones (Ryan Carnes) about “Wiley Cooper-Jones” for over a year! Fortunately, Shen’s got a strong relationship real life. In fact, this month marks his 17th marriage anniversary.

Shen opened up about meeting his true love in the latest issue of ABC Soaps in Depth. He knew his wife, Kim, was the one early on. Unfortunately, it took some work for Shen to break out of the friend zone. He had to be bold enough to make his move and do some convincing.

The pair met at a boarding school in Ojai, California. That allowed them to become pals for a few years before they accepted their romantic spark. “She was the dorm parent of the girls’ dorm, and I was the dorm parent of the boys’ dorm,” Shen explained. He noted that he quickly settled into the “best friend” role, but Kim would grow frustrated when other guys couldn’t live up to how nice her bestie was!

Shen finally had enough of waiting four years into their relationship. He decided to write a sweet love letter and really pour his heart out. “I wrote a note to her professing my feelings,” Shen admitted. “I kind of tossed it to her and said, ‘Read this when you have a chance…but not right now in front of me!’”

Shen’s love profession proved to be a real shocker for the woman who would eventually become his bride. However, Shen got the girl. They decided that their relationship really made sense and ultimately tied the knot in 2002. The Shens also have two daughters together: Avery is now 14 and Kori is 11. It’s always nice to hear about General Hospital stars and their happy families.

Celebrating 17yrs ago today when these crazy kids got married! All the details how how we met in the latest @soapsindepthabc 👰 🎩 💒 pic.twitter.com/we0BkO8FEM