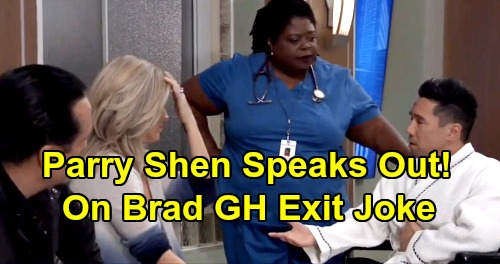 General Hospital (GH) spoilers reveal that one ABC soap star is speaking out about a joke that went horribly wrong. GH fans may have heard that before all the car crash drama aired, Parry Shen posted a cryptic farewell message on Facebook. He suggested he should quote Chris Evans and delivered what many viewers thought was a heartfelt goodbye.

It turned out to just be Shen messing with everyone a bit. He had posted a link to an article that asked if he was leaving, so he was just kidding around. Unfortunately, the message itself wasn’t overly humorous and the timing couldn’t have been worse. Most of us knew about the car accident thanks to General Hospital spoilers, so fans started freaking out about Brad being killed off.

It was a perfectly reasonable reaction based on Shen’s incredibly misleading post. Shen tried to combat the drama he caused with another comment, which indicated he might be kidding. However, it took a while for insiders to confirm that Brad was sticking around. Even then, plenty of GH watchers couldn’t help but be a tad fearful until Brad was revealed to be OK.

Thankfully, Brad’s going to be just fine – which is good news if you love him AND good news if you hate him! It would’ve been a major letdown if Michael Corinthos (Chad Duell) couldn’t unleash his wrath on Brad. Michael deserves a chance to rip into Brad with everything he’s got, and he wouldn’t have been able to do that if Brad had wound up dead.

On Twitter, Shen clarified his earlier statement and made it clear he didn’t mean for the exit buzz to get so out of hand. After posting another fun video with a clip of himself watching General Hospital, someone called it an expert use of social media.

Shen replied, “But what was NOT an expert use was assuming my comment about an article regarding Brad’s demise on my FB wouldn’t be taken out of context and blown outta proportion like a game of telephone gone wrong.” It’s good that Shen’s acknowledging his failed attempt at social media humor. After all, it’s not a very funny joke if people struggle to understand you’re joking!

Nevertheless, Shen seems like a kindhearted guy who just likes to have some fun. We certainly won’t hold the blunder against him. General Hospital spoilers say Brad will indeed face the “Wiley Cooper-Jones” (Erik and Theo Olson) music down the road! We’ll give you updates as other GH details emerge. Stay tuned to the ABC soap and don’t forget to check CDL often for the latest General Hospital spoilers, updates and news.

But what was NOT an expert use was assuming my comment about an article regarding Brad’s demise on my FB wouldn’t be taken out of context and blown outta proportion like a game of telephone gone wrong.