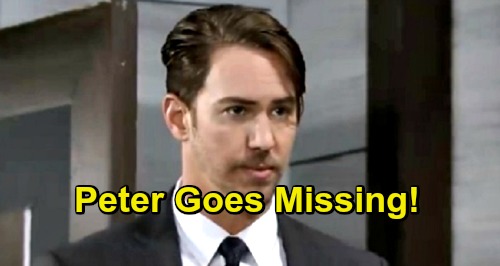 General Hospital (GH) spoilers tease that Maxie West (Kirsten Storms) has some great news headed her way. She’ll get some exciting updates that’ll fill her heart with joy. This could be about something personal or possibly some development at Crimson. Regardless, Maxie will find herself on cloud nine and she’ll know exactly who she wants up there with her.

Of course, we’re talking about Peter August (Wes Ramsey). After Maxie receives this thrilling news on January 23, she’ll immediately want to let Peter share in her happiness. They’re inching toward a real romance, so it makes sense for Maxie to want him in the loop on all her endeavors and successes.

However, Peter may not be available right away. General Hospital spoilers say Jordan Ashford (Briana Nicole Henry) will summon Peter to the PCPD that same day. There could be a couple reasons for that.

One is that Peter might be accused of a murder in town. There’s been some speculation about Lulu Falconeri (Emme Rylan) possibly getting killed off, which would make Peter an easy framing target.

Ryan is Lulu’s boss at The Invader and he’s in charge of everything that gets published. He’s got final approval on everything, but that doesn’t mean Lulu won’t wear him down on her next ill-advised Ryan Chamberlain (Jon Lindstrom) story. Lulu could even go behind Peter’s back and make sure the public knows everything they need to know.

That could get both Lulu and Peter in big trouble, but there’s another option, too. Peter could land in some grave danger of his own! General Hospital spoilers say Maxie will be stuck waiting on January 25. She won’t know what could be keeping Peter, so she may start to panic. After all, there is a serial killer on the loose!

The fact that Maxie will wait for Peter to arrive somewhere isn’t an interesting spoiler on its own, so what’s the point? Why did GH put this out there? Perhaps the real excitement comes from WHY Peter will be late.

Could Peter get in Ryan’s way or find himself in a position where he tries to protect Lulu? Peter might even get on Ryan’s bad side thanks to that meeting with Jordan at the police station.

If Peter gets too close to the scoop of the century, Ryan may have no choice but to plot his deadly fate. Whether Peter dies or not, it’s clear that no one is safe in Port Charles! We’ll keep you posted as other GH details emerge. Stay tuned to the ABC soap and don’t forget to check CDL often for the latest General Hospital spoilers, updates and news.