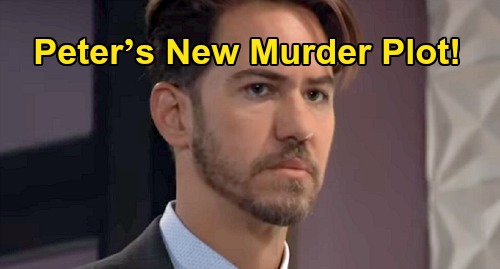 General Hospital (GH) spoilers tease that Peter August (Wes Ramsey) will find himself facing another desperate situation. Just when he puts out one fire, another one flares up. Peter’s goal of keeping Maxie Jones (Kirsten Storms) in the dark will become harder and harder to pull off.

Nevertheless, Peter has no intention of giving up. He’s finally found happiness with Maxie, so he’ll do whatever it takes to preserve it. Peter is more than willing to go as far as it takes. He’ll seemingly target anyone he has to if it means Maxie doesn’t learn the truth.

Peter was behind Drew Cain’s (Billy Miller) plane crash along with Andre Maddox’s (Anthony Montgomery) stabbing. He also tried to orchestrate Shiloh Archer’s (Coby Ryan McLaughlin) murder. That plan didn’t work out the way Peter expected, but he still got rid of his problem through Sam McCall (Kelly Monaco), who’s now being framed by Peter.

General Hospital spoilers say Peter will worry about a new threat soon. He’ll feel like one Port Charles resident could blow everything for him, so he’ll decide to take action. Peter has taken a more hands off approach up until now, but it looks like he’ll tackle this project on his own. He may decide if you want something done right, you have to do it yourself.

There’s also a chance Peter will be forced into this situation on the spur of the moment. Regardless, General Hospital spoilers say Peter will make another dark move. Word has it Peter may tamper with the brakes on someone’s car, but who might that someone be? We’ve got some good possibilities to consider.

It appears Franco Baldwin (Roger Howarth) will win his court case with Martin Gray’s (Michael E. Knight) help. There’s no confirmation on that yet, but things seem to be heading in that direction based on hints and GH spoilers. That eliminates Peter’s Franco worries for now, but what happens if Franco changes his mind? What if Franco decides to go through with the memory procedure voluntarily?

It’s easy to imagine Peter going after Franco in that case. If Franco were to crash and receive a head injury, that might bring his memories back in a different way. Anyone who’s watched soaps for a while knows that sometimes things can be jogged loose!

However, Lulu Falconeri (Emme Rylan) might be another option here. General Hospital spoilers say some danger could be headed Lulu’s way. Will Peter be the reason why? He’d have the perfect person to set up since Valentin Cassadine (James Patrick Stuart) is holding a grudge right now.

Lulu and Maxie have been at odds lately, but they’re still best friends. Perhaps Lulu will grow suspicious and find out a bit too much. Peter could go after he and truly eliminate any hope of Maxie ever forgiving him. If he nearly kills Lulu, you can bet Peter will face the full extent of Maxie’s wrath.

Jason Morgan (Steve Burton) might even be an option if Peter decides to be that gutsy! General Hospital spoilers say Peter will dig a deeper hole for himself no matter what, so don’t miss what’s in store. We’ll give you updates as other GH news comes in. Stay tuned to the ABC soap and don’t forget to check CDL often for the latest General Hospital spoilers, updates and news.