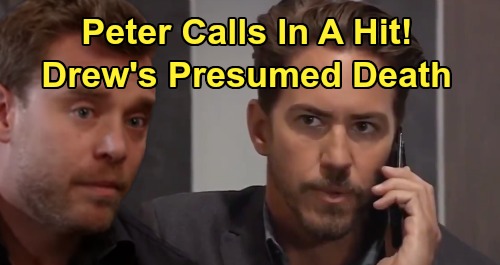 General Hospital (GH) spoilers reveal that Peter August’s (Wes Ramsey) phone call could have catastrophic results. Before we get to that, let’s recap the jam Peter’s stuck in. He’s agreed to help Shiloh Archer (Coby Ryan McLaughlin) in exchange for his silence. Peter’s happily in love with Maxie Jones (Kristen Storms) and has put his past behind him, so he doesn’t want Shiloh bringing new details to light.

Of course, the key new detail involves Peter and Helena Cassadine’s (Constance Towers) connection. Many GH have been complaining about this not being a big enough secret. It wasn’t a great decision of Peter’s, but Maxie loves the man he is now. This doesn’t seem like a deal-breaker since she already knows Peter was mixed up in all that memory-mapping mayhem.

Peter is only digging a bigger hole for himself. Lying to Maxie and helping Shiloh will certainly come back to bite him. However, it’s Peter’s latest dark move that could prove truly troubling. That brings us to that phone call we mentioned. After Peter got updates on Drew Cain’s (Billy Miller) plan, he took a bold step to stop it.

Peter called someone up and said, “I just found out that Drew Cain is on his way to find Andre Maddox. Make sure he doesn’t.” Peter was practically snarling on that last part. It’s clear that he means business! It’s also clear that we’re back in full-blown Henrik Faison territory. This isn’t the soft and cuddly Peter GH has been trying to sell us for months.

We have no doubt that Peter loves Maxie or he wouldn’t be going this far to keep his relationship intact. Nevertheless, it’s quite common for villains to do twisted things in the name of love. Based on the sudden turn we’re seeing, General Hospital definitely seems to be putting Peter back on a villainous path.

Does that mean Peter is headed for the exit door or are they just taking advantage of Ramsey’s best angle? Ramsey shines as a bad guy and the “Paxie” pairing is arguably pretty lackluster. It’s in GH’s best interest to just take the villain route here. Perhaps Peter could stick around and be a true baddie.

Whatever the case, that phone call was ruthless. It’s easy to interpret it as ordering a hit. Whether that’s what it was or not, it’s obvious Peter’s orders won’t go well for Drew. Billy Miller has already made his onscreen exit, so Peter’s fateful call could lead to Drew’s presumed death.

😕 it wasn’t bad enough Billy Miller’s final scene was in an elevator, now his character is getting killed off by Peter August. #GH pic.twitter.com/Epb43VcbCF