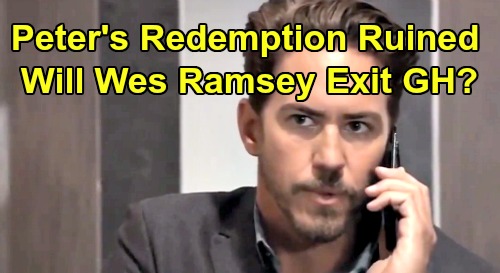 General Hospital (GH) spoilers reveal that Peter August (Wes Ramsey) is falling back into old habits. We’re suddenly seeing Peter’s dark side again, so we have to consider what that means for his future at GH. Could Wes Ramsey be headed for the exit door? It’s certainly a possibility based on how the show usually treats truly ruthless villains.

In the episode airing August 23, Peter delivered an order that will likely prove deadly. He insisted the person on the other end should make sure Drew Cain (Billy Miller) doesn’t find Dr. Andre Maddox (Anthony Montgomery). Does he want to snuff out Andre or perhaps Drew? Peter didn’t give specifics, but he honestly doesn’t seem to care as long as those two don’t come face to face.

Of course, Peter has already agreed to help Shiloh Archer (Coby Ryan McLaughlin) – the scum of the earth. If General Hospital wanted to keep Peter on redemption road, Shiloh is the last person he’d be associating with. That brings us to another good point. Peter has already been redeemed, and it was long, hard process. Are they really going to go through all that again since his redemption has clearly been ruined?

Consider what happened with Nelle Benson (Chloe Lanier). She came on the scene with huge secrets like Peter and also faced a long redemptive journey after those secrets were exposed. However, GH seemingly figured out that Nelle worked best as a crazy schemer. She turned back to the dark side and her redemption was thrown out the window.

Ramsey also shines as a villain. He’s easier to buy as evil Henrik than doting Peter, who doesn’t serve much of a purpose other than to make heart eyes at Maxie Jones (Kirsten Storms). We’re seemingly reentering that sinister and twisted zone of his personality. Peter may have turned things around, but his latest behavior shows he can be heartless if need be.

How long can Peter stick around if they’re going to make him a true baddie? Nelle didn’t last long – at least not beyond these little prison popups. It’s doubtful Shiloh will linger too much longer either. Ryan Chamberlain (Jon Lindstrom) should have some more scenes coming up, but he’s not a viable character long-term. The truly callous villains tend to get locked up or killed off.

General Hospital won’t even let Valentin Cassadine (James Patrick Stuart) be all that menacing. He was supposed to be a man who sparked fear, but he’s more of a family man than anything. We’ve got characters like Brad Cooper (Parry Shen), who’s doing a terrible thing but truly loves “Wiley Cooper-Jones.” Liesl Obrecht (Kathleen Gati) can be quite conniving as well, but she’s mostly treated as comedic relief.

Then, there’s Sonny Corinthos (Maurice Benard). The mob boss who officiates his dad’s wedding, takes in a poor Turkish teen and makes healthy lasagna for his pregnant wife. In other words, General Hospital doesn’t like horrible people roaming around Port Charles forever. Gray characters are fine, but Peter seems to be headed beyond that. He’ll apparently be the reason Drew is presumed dead.