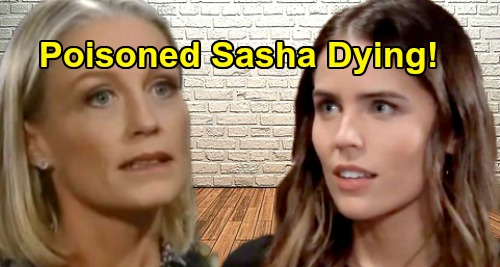 Sasha seemed fine as she headed off to enjoy the rest of her island getaway with Michael, but that’s bound to change. It looks like this may be some sort of slow-acting poison. During the week of August 5-9, Sasha will be well enough to go apartment hunting in Port Charles. She’ll join Lucy Coe (Lynn Herring) as she checks out a few potential options.

There’s a good chance Sasha will exhibit strange symptoms at some point during all this. She’ll open up to Maxie Jones (Kirsten Storms) later, so Sasha may admit she hasn’t been feeling the greatest. Maxie might think Sasha should get checked out at GH as a precaution. However, Sasha may choose to downplay her issues and try not to worry Nina. She won’t want her fake mom freaking out.

Of course, that’s exactly what Nina’s going to do when Sasha takes a turn for the worse. General Hospital spoilers state that Nina and Valentin Cassadine (James Patrick Stuart) will face a crisis during the week of August 12-16. They’ll be forced to tend to Sasha, so it sounds like she may collapse and require their help.

Later, Valentin will clash with Hamilton Finn (Michael Easton) at GH. Although Valentin will fear for Sasha’s life, he’ll also fear too many tests and medical background digging. Sasha isn’t biologically related to Nina unless there’s some big twist brewing. That means any health-related drama is cause for concern.

Previous General Hospital spoilers pointed to a tough medical mystery for Finn. This seems to be the one! Finn should be perplexed about what’s ailing Sasha and how to fix it. Cassandra’s injection could leave Sasha with a serious illness that only she can cure.

GH fans will recall how Cassandra made a selfie with Sasha and Michael, which might be used as part of the plot eventually. Cassandra could easily make demands in exchange for the antidote. Nina should feel terrible when she realizes Sasha’s in grave danger because of their connection.

Naturally, there’s no guarantee Cassandra will keep her end of any bargains that are made. Why should she? She’s a villainess who’s out for revenge. If there’s no real antidote or it doesn’t work, Finn could still be tasked with finding a miracle cure.

The medical chaos will definitely put Valentin and Sasha’s secret at risk. Will there be some scenario where Valentin has to make a choice? Could he reveal the fake daughter shocker to save Sasha’s life? Will Valentin get Sasha treatment that lines up with her true genetics?

It looks like this storyline is about to heat up! We’ll give you updates as other GH news comes in. Stay tuned to the ABC soap and don’t forget to check CDL often for the latest General Hospital spoilers, updates and news.