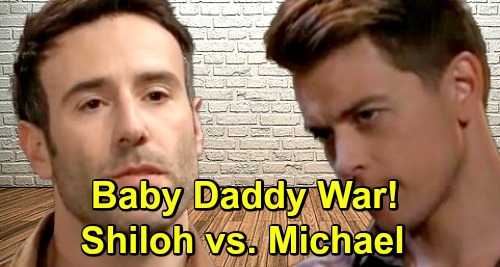 General Hospital (GH) spoilers tease that Shiloh Archer (Coby Ryan McLaughlin) will prove he’s a force to be reckoned with. He’s tightening his grip on Kristina Corinthos-Davis (Lexi Ainsworth), but he’ll have to shift his focus to Willow Tait (Katelyn MacMullen) soon. Now Shiloh knows Willow is in Port Charles and she knows he’s there, too. It won’t be long until the horrible past collides with the present.

During the week of March 25-29, Shiloh will confront Willow about her abrupt departure from Dawn of Day. He’ll make it clear he’s not happy about it, so Willow will get spooked. She’s already got an exit plan in motion, but she’ll hope she can move it along quickly.

Despite Willow’s blooming relationship with Harrison Chase (Josh Swickard), she just can’t afford to stick around and cause trouble for her “son.” GH spoilers confirm Shiloh is the original Wiley Cooper-Jones’ father. Since Willow doesn’t know Wiley died and was replaced by Jonah Corinthos, she’ll be a wreck over the possibility that Shiloh will find out about their child.

After he interrupts Willow and Shiloh’s confrontation, Chase will wonder what’s up. He’ll sense the tense vibe and seek answers from Willow privately. General Hospital spoilers say Willow will break down and confess to Chase. She’ll come clean about getting sucked into DoD and becoming a victim of Shiloh’s seduction.

Chase will promise to protect Willow, but you can bet Michael Corinthos (Chad Duell) will be pulled into this as well. In fact, his mention of Willow’s name is what tipped Shiloh off in the first place. Michael also sought Chase’s help with DoD for Kristina’s sake, so Michael should get wrapped up in Willow’s side, too.

Willow could easily fill Michael in on the news that his godson is Shiloh’s kid, which isn’t true at all! This is shaping up to be a fake “baby daddy” vs. real “baby daddy” showdown. Since Kristina, Willow and “Wiley” are at risk, you can bet Michael will get fierce. He won’t even realize he’s going to battle for his own son’s sake.