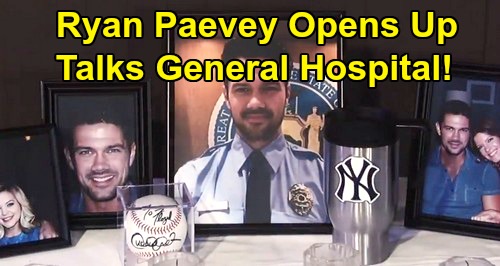 General Hospital (GH) spoilers reveal that Ryan Paevey (ex-Nathan West) has been doing some reflecting. In a recent interview with Soap Opera Digest, Paevey opened up about his time at General Hospital and what he’s been up to since his departure in 2018. The former GH star certainly appreciated his four-year run as Nathan and looks back on it fondly.

Paevey pointed out that he was a total newcomer when he first started at General Hospital. Since he didn’t have experience in the business, he was just happy to get a job. Paevey feels lucky that GH gave him such a nice, likable character to play. He used to work as a bartender and server at a sushi restaurant, so he suggested he could’ve easily ended up back there if they’d made Nathan a jerk!

Fortunately, Nathan was definitely a sweetheart we could all root for. That was especially true when it came to his relationship with Maxie Jones (Kirsten Storms). Of course, it also made it truly devastating when Nathan was killed off at the end of his GH stint. On the bright side, General Hospital decided to give Nathan a special exit that helped us all mourn the loss.

“Nathan got a serious send-off,” Paevey said. “I’m blown away by the level of canvas mobilization that I observed in my exit.” Paevey insisted the toughest part was trying to keep himself from crying during Nathan’s open-casket funeral! He was stunned by all the fantastic performances of his costars and friends.

Of course, Paevey pointed out he wasn’t always so beloved by social media. He recalled how early on, there was a Twitter campaign what a “garbage actor” he was. Paevey suggested people were lining up around the block to tell him they couldn’t wait for him to be fired.

Thankfully, many General Hospital fans adored Nathan by the time he exited the show. Even so, Paevey wanted to try something different and was willing to gamble on unemployment for it. He didn’t have another job lined up when he left GH, but he ended up making a deal with Hallmark that ensured he’d keep working.

“I got lucky when I got GH, and I got lucky again with Hallmark,” Paevey insisted. “To have been welcomed into a family that promises they will take care of you is great.” Paevey’s latest Hallmark movie is called Christmas at the Plaza, and it premiered on November 29. Naturally, they’ll be playing and replaying Christmas movies throughout the holiday season, so there’s still plenty of time to catch it.

Paevey acknowledged that Hallmark can sometimes get flak for a repetitive formula, but that’s part of the charm. Sometimes you just want to relax and know you’re going to get a happy ending. Many GH fans miss Nathan, so those Hallmark movies are a fantastic opportunity to keep seeing this handsome actor on TV. We wish Paevey the best of luck as he continues his career!