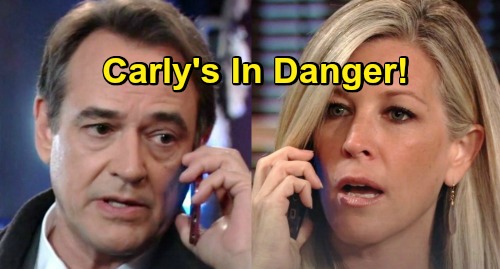 General Hospital (GH) spoilers tease that Ryan Chamberlain (Jon Lindstrom) will add to his list of victims soon. He’ll come up a new murder target next week along with a plan for how to do away with him or her. Perhaps Ryan will mix it up a bit this time. He may go for an out-of-pattern killing to really throw the PCPD for a loop.

Thanks to a chat with Mac Scorpio (John J. York), Ryan will likely know about the clue Jordan Ashford (Briana Nicole Henry) uncovered. He’ll realize that his driver’s license trophies have stirred up some Ryan drama. Jordan suspects that there’s a Ryan copycat out there who’s possibly trying to outdo the original.

Will Ryan choose to leave the driver’s license behind for his next kill or is he far too obsessed for that? We’ll have to wait and see, but the cops will remain hot on Ryan’s trail. They’re getting far too close to connecting the dots. If someone realizes Ryan is indeed still alive, the pieces will all fall into place.

General Hospital spoilers reveal that a member of the Corinthos clan will rise to the top of Ryan’s murder list. It’s easy to guess which one! Carly Corinthos (Laura Wright) has become a problem that needs to be dealt with. She won’t let this whole Ferncliff and “Wilson Ritter” thing go.

Ryan will set up a meeting with Carly, which surely involves an attempt to lure Mrs. Corinthos to her death. Talking to Carly is pretty much Ryan’s least favorite activity, so he certainly wouldn’t contact her just to gab. However, GH fans probably shouldn’t be too concerned about Carly’s fate. When a major death is brewing, there are usually leaks. No one’s heard a peep about Carly actually being killed off.

With that in mind, how will Carly avoid a gruesome end? Will Ryan be interrupted before he can do the deed? Will he start the grim process and face an unexpected obstacle? Carly may not end up dead, but she could still be seriously injured. Almost dying would provide plenty of drama for Carly’s loved ones and leave her with a big secret to reveal when she wakes up.

General Hospital spoilers point to extreme danger for Lulu Falconeri (Emme Rylan) at some point, so Carly may not be Ryan’s final target. It’s doubtful Ryan will finish Lulu off either, but the same idea of horrible injuries applies. Even Laura Collins (Genie Francis) could be in big trouble, especially since she’ll be poking around Ferncliff as Port Charles’ new mayor.

It sounds like there’s loads more murder mayhem in store. We’ll give you updates as other GH news comes in. Stay tuned to the ABC soap and don’t forget to check CDL often for the latest General Hospital spoilers, updates and news.