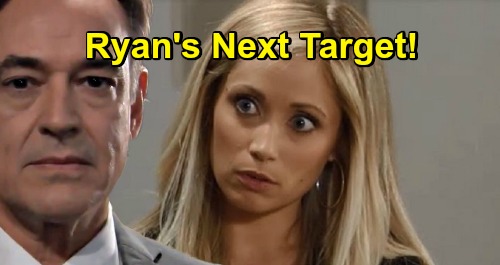 General Hospital (GH) spoilers tease that Ryan Chamberlain (Jon Lindstrom) will strike again, but when and where will the next nightmare unfold? Lulu Falconeri (Emme Rylan) is holding an event at Charlie’s Pub on Friday, January 4. We all know how Ryan loves to shake up Port Charles gatherings, so there’s always a chance he’ll cause another round of lethal chaos!

Lulu has already been doing some snooping, so it won’t be long until she’s in Ryan’s dangerous path. Could he target her at this big event? Ryan probably won’t try to kill Lulu just yet, but he could certainly poke around and see what she knows. He might keep his eyes and ears open as he plots Lulu’s eventual murder.

Whatever the case, Ryan will definitely make a few waves on Friday. His excuse for crashing this party will be Laura Collins (Laura Francis) and her current run for mayor of Port Charles. GH fans know Ryan has been posing as his brother, Dr. Kevin Collins (Jon Lindstrom). However, suspicions about his behavior are on the rise. Ryan needs to do something to quiet the concerns or there’ll be real trouble.

General Hospital spoilers hint that this may be some sort of campaign event. Lulu’s been supportive of Laura’s political aspirations and now it’s Ryan’s turn to show his support, too. Laura will look anxious when “Kevin” enters Charlie’s Pub and suggests it’s time to make his intentions known. She’ll probably worry he’s going to make some Ava Jerome (Maura West) announcement and humiliate her.

Fortunately, Ryan won’t do that. He’ll leave Laura pleasantly surprised instead, so he’ll probably just insist that Laura’s got his vote. Since Ryan’s got a way with words, he may make a passionate speech and leave Laura wondering if she was wrong about his “Kevin’s” mental struggles.

Of course, it’s tough to believe this announcement will be Ryan’s only goal. Will there be another reason for this party and Ryan’s sudden appearance? Ryan has established a pattern with his holiday killings and very public victim displays. That’s given the cops a trail to follow, but maybe Ryan needs to mix up his routine and leave them even more flummoxed.

By killing someone on an insignificant Friday and keeping the big event portion intact, Ryan could bring up the idea of a sloppy copycat in Jordan Ashford’s (Briana Nicole Henry) mind. That’s especially true if Ryan does it on site this time and doesn’t bother moving the body across town. Confusion is Ryan’s friend if he wants to keep getting away with his crimes.

This would also rev up the fear in Port Charles since it’s so soon after the killer’s last murder. Ryan would probably like to cause total panic and this is the perfect opportunity. It’s possible someone will get in Ryan’s way just like Peyton Mills (John Patrick Jordan) did.

Even if everyone makes it out of this gathering alive, you can bet more deadly danger’s brewing. General Hospital spoilers say Lulu will land in extreme peril at some point, so don’t miss all the drama. We’ll give you updates as other GH news comes in. Stay tuned to the ABC soap and don’t forget to check CDL often for the latest General Hospital spoilers, updates and news.