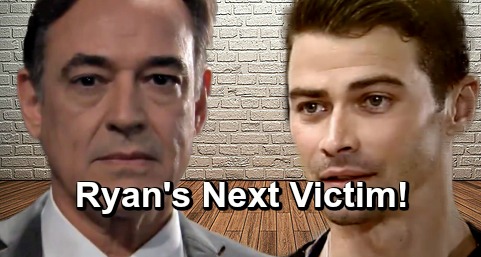 General Hospital (GH) spoilers tease that Ryan Chamberlain (Jon Lindstrom) will be a busy guy in the coming weeks. He dodged a bullet by taking out Peyton Mills (John Patrick Jordan), the smug producer who could’ve blown his secret wide open.

Peyton planned to suggest Ryan could be alive in his TV special and that was a possibility this killer didn’t want on people’s minds.

With Peyton out of the way, Ryan may think he can avoid hurdles for a while. He might let his guard down, but that’s not the best idea if he wants to avoid detection. Now that Ryan’s added a third murder to the list, several threats will be revving up.

For starters, Jordan Ashford (Briana Nicole Henry) will become increasingly fixed on this case. She’ll rely on Curtis Ashford (Donnell Turner) for a little help, which makes sense considering they’re married and he found the bloody aftermath of the third victim.

Of course, Ryan happens to be working with the police as “Kevin Collins.” That means they’re unlikely to make much progress anytime soon.

Lulu Spencer (Emme Rylan) will also become a pest with her search for answers. This investigative journalist will become a thorn in Ryan’s side, so that’ll be another distraction to deal with. GH spoilers say Ryan will eventually realize Laura Collins (Genie Francis) could be a problem, too. He pushed her to run for mayor, but what happens if she actually pulls off a win?

Ryan will determine that Laura’s victory may not be ideal. She could easily put pressure on the PCPD and lead the charge on hunting him down. Since “Kevin” recently split from Laura, that adds to the complicated situation.

Plus, Carly Corinthos (Laura Wright) could remain hung up on the mystery patient at Ferncliff. Ryan tried to satisfy her with some bogus info, but it may not be enough.

General Hospital spoilers say Ryan will have to keep up his romantic efforts as well. Ava Jerome (Maura West) will need plenty of Ryan’s attention, so it’ll be a lot for Ryan to juggle. What does all this mean for Ryan’s secret? Perhaps Ryan will be too busy to notice a threat that slips under the radar.

At the moment, Ryan probably doesn’t view Dr. Griffin Munro (Matt Cohen) as a threat at all. He’s a kind ex-priest, so why would Ryan think he was capable of anything? However, grief can drive even the most caring individuals to an incredibly dark place.

General Hospital spoilers say Griffin will battle his inner demons over the next couple months. He’ll deal with his sorrow in a dangerous manner, so trouble may be brewing. In fact, Griffin could be in far more trouble than he realizes.

Griffin’s already done a little drinking while mourning for Kiki Jerome (Hayley Erin), but this could be about something much worse. Maybe Griffin will decide that revenge is only thing that can help him. It’s easy to imagine Griffin digging around with Lulu’s assistance or calling in favors from Anna Devane (Finola Hughes).

Plus, GH fans can expect a startling event in Anna’s life soon. It could tear her world apart, so Griffin’s murder or at least attempted murder would fit here. If Ryan can’t get Griffin under control, he may feel he has no choice but to kill him. When you add Ryan’s growing thirst for blood, things could get ugly!