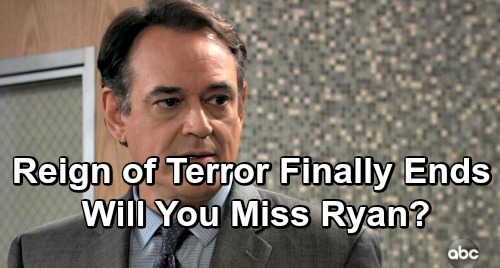 General Hospital (GH) spoilers tease that Ryan Chamberlain’s (Jon Lindstrom) reign of terror is winding down, but not before the drama heats up! GH fans will see even more exciting scenes as the news of Ryan’s survival and killing spree spreads. Of course, Ryan will be off in Niagara Falls with Ava Jerome (Maura West) when the exposure rocks Port Charles. That’ll certainly add to the suspense.

This is all building to Ava’s realization of who “Dr. Kevin Collins” really is. She’ll inevitably find out that the “Kevin” she’s come to love and rely on is actually his evil twin. The worst part will obviously be that Ryan murdered Kiki Jerome (Hayley Erin). Ava’s sure to fly off the handle and seek revenge. No one would be surprised if Ava turned the tables on Ryan and made him her victim.

After all, Ryan did promise that he’d ease Ava’s grief. He added that he’d die to keep that promise, so General Hospital may let him keep his word. The only thing that will bring Ava any type of satisfaction will be to take Ryan out like he took out Kiki. She’ll certainly have enough rage running through her body to pull it off.

Whatever the case, this serial killer storyline will soon come to an end. Some GH fans have been eager to see it conclude for a while now. General Hospital writers have certainly done their best to stretch things out. However, other viewers will be sad to see Ryan go. We all knew his time was limited when this hot plot kicked off, but Ryan has brought some fun and thrilling moments.

Jon Lindstrom has impressed the soap world with his latest run as the devious and surprisingly charming Ryan. The fact that Lindstrom can pull off someone who’s both disturbing and hilarious is no small feat. He manages to balance Ryan’s different sides and bring a compelling character to life.

Lindstrom also seems to be having a blast in the role, which is always nice. When a soap star appreciates the gripping material he or she’s given, it makes it even better. Lindstrom will have to focus solely on playing Dr. Kevin Collins once this is all over. Many GH fans love him as well, so hopefully Kevin will get another story with Laura Webber (Genie Francis) next.

How do you feel about Ryan’s wrath finally ending? Will you miss Lindstrom as Ryan or are you ready for Port Charles’ worst nightmare to be over? We’ll give you updates as other GH details emerge. Stay tuned to the ABC soap and don’t forget to check CDL often for the latest General Hospital spoilers, updates and news.