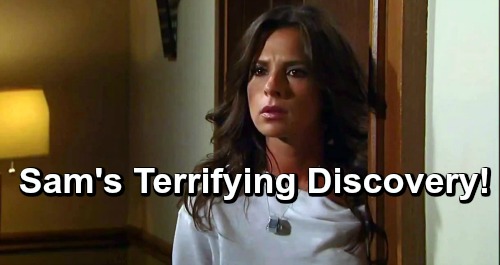 General Hospital (GH) spoilers tease that Kristina Corinthos-Davis (Lexi Ainsworth) will prepare for a special occasion. She’ll be both nervous and excited as she gets ready for her induction into “The Trust.” Of course, Kristina will need some help before she takes this big step. Shiloh Archer (Coby Ryan McLaughlin) will count on Harmony (Inga Cadranel) and Daisy Kwan (Kelsey Wang) to pitch in on this.

Daisy and Harmony will help Kristina know what to say and how to act. Kristina will listen closely and do whatever they tell her to do. She hasn’t been part of Dawn of Day that long, but she’s already brainwashed into never thinking for herself. It’s Shiloh’s way or the highway as far as Kristina’s concerned – and she’s definitely made that clear to her family.

Unfortunately, Kristina’s family is more wrapped up in this than they realize. Shiloh was pleased when Kristina handed over her mysterious trust offering. GH fans still don’t know what’s on that recording, but we can confirm this dark secret involves Alexis Davis (Nancy Lee Grahn).

Kristina insisted this is something she’s never told anyone before – not even Parker Forsyth (Ashley Jones). That tells us it it’s something Kristina has known for a while. It’s a buried memory Alexis probably wants to forget, not some recent event she covered up. Since General Hospital viewers know all of Alexis’ dirty little secrets, maybe the show has invented another one just for this storyline.

Regardless, that recording and the money Julian Jerome (William deVry) coughed up were Kristina’s last hurdles. She’s about to become part of “The Trust” unless someone intervenes. Of course, Sam McCall (Kelly Monaco) will be wary of her sister getting in too deep. She’ll work hard to prevent this DoD disaster.

While Shiloh gives Kristina a pre-induction pep talk and presents her with a ceremonial garment, Sam will do some digging. She’ll climb up to the attic of the community house and what she finds will leave her aghast. There’s no word yet on what Sam’s discovery will be, but it sounds truly disturbing.

It could be a combination of things like a bed and the necessary tools for that property tattoo on all Shiloh’s women. Maybe there’s even some sort of sinister Shiloh shrine up there. Who knows just how creepy this guy is? Regardless, there’s a good chance sex will be part of the deal for Kristina.

Willow Tait (Katelyn MacMullen) talked about being honored when she was chosen to sleep with Shiloh. She regrets it now, but that’s how he made her feel back then. Will Kristina be convinced she should feel the same way? Shiloh will take Kristina up to the attic after Sam clears out, so it’ll be the moment of truth.