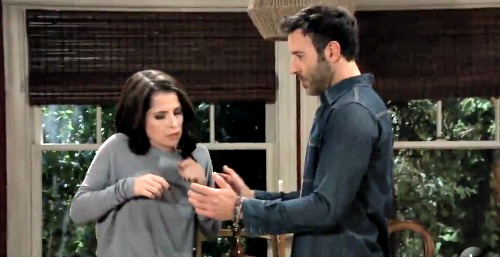 General Hospital (GH) spoilers tease that Sam McCall (Kelly Monaco) might do something Jason Morgan (Steve Morgan) won’t approve of. In an effort to get closer to Shiloh Archer (Coby Ryan McLaughlin), Sam might consider moving in the Dawn of Day house. That would certainly allow her to gain even more of Shiloh’s trust. It would also give Sam access to intel she could use to take Shiloh down.

Even though Kristina Corinthos-Davis (Lexi Ainsworth) isn’t in the Dawn of Day house anymore, Sam may determine that moving in is the right call. That way she could totally immerse herself in Shiloh’s world and speed this process along. If Kristina escapes and is able to return to the house, this would also leave Sam waiting for her there. She’ll obviously want to keep Kristina close if that happens.

Sam knows Kristina isn’t the only young woman in trouble at Dawn of Day. Shiloh is a manipulative creep who poisons the minds of those in the group. He makes them believe he’s their savior and the only one who really matters. Shiloh is able to control his followers through brainwashing and leverage, so he gets to tell them what to do, how to act, what to say, etc. And he does it all with a sly smile!

Sam won’t stop until she has dirt on Shiloh and can take his cult down for good. However, Jason will be wary of Sam getting in this any deeper. Now that the cup Kristina drank from is in the hands of Sonny Corinthos (Maurice Benard), it’ll truly be tested. Brad Cooper (Parry Shen) seemingly didn’t test it after his chat with Shiloh at GH, so they could use some real results this time – preferably incriminating ones.

Jason won’t want Sam to endanger herself by continuing her undercover sting. Nevertheless, General Hospital spoilers state that taking legal action against Shiloh and DoD could be difficult. That’s especially true since DA Margaux Dawson (Elizabeth Hendrickson) seems to be under Shiloh’s spell as well.