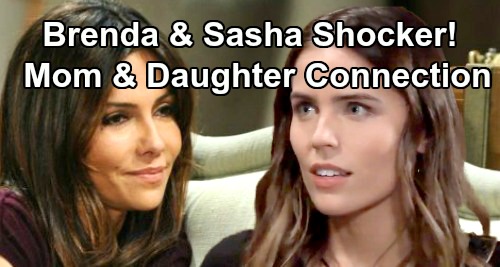 General Hospital (GH) spoilers tease that a shocking connection may be exposed. Could there be a link between Sasha Gilmore (Sofia Mattsson) and Brenda Barrett (Vanessa Marcil)? In a recent GH episode, Lucy Coe (Lynn Herring) approached Sasha as she dined with Michael Corinthos (Chad Duell). She couldn’t stop herself from staring, which lead to an intriguing comment about Sasha’s appearance.

Lucy suggested that Sasha could’ve been “The Face of Deception” and referenced the cosmetic company from decades ago. It was an odd thing to bring up, so this could be a hint General Hospital’s offering. Perhaps Lucy was drawing a comparison between Sasha and Brenda Barrett, the original face of Deception.

Lucy was also giving Sasha a compliment and trying to nudge her into modeling, but it feels like there’s the potential for more here. After all, almost every GH character has a hidden connection or two. Since Sasha isn’t Nina Reeves’ (Cynthia Watros) biological daughter, that opens the door to some great possibilities. Brenda might be related to Sasha, which could set up a fun return.

Longtime General Hospital viewers will recall that teenage Brenda Barrett first came to Port Charles in the ‘90s. Back then, Lucy had formed a cosmetics company which Laura Webber – then Laura Spencer (Genie Francis) – later bought. Jasper “Jax” Jacks (Ingo Rademacher) was also involved in Deception Cosmetics. Lucy made beautiful Brenda their top model, giving her the title “The Face of Deception!”

General Hospital has been known to rewrite history from time to time, so they could do it again for Sasha’s sake. It’d give them somewhere to go with this character if they revealed her as the long-lost daughter of Brenda. The resemblance is there and GH could certainly find a way to make this work.

If Sasha does turn out to be Brenda’s long-lost daughter, Brenda would’ve had her as a young teenager – possibly in the months before showing up in PC at the age of 18. Brenda would be around 45 years old now according to most historical General Hospital sources.

Sasha is thought to be around 25, but her age had to match the time period of Nina’s coma. That could mean she’s actually a little older if Sasha fibbed that part for Valentin Cassadine’s (James Patrick Stuart) plan. Honestly though, soaps often adjust the ages of characters to fit their needs, so GH writers can do whatever they want here.

It might be worth mentioning that Brenda moved to Rome when she left Port Charles. Last year, Hayden Barnes (Rebecca Budig) wanted to meet Hamilton Finn (Michael Easton) in Rome. Now Hayden has come back with Jax, who was once involved with Brenda. Between that and his previous association with Deception Cosmetics, perhaps Jax could become a key player and expose the truth about Sasha.

Regardless, General Hospital spoilers say this fake daughter scheme is set to explode. Will a true GH link be revealed later? Will the show rewrite history again and set up a Brenda-Sasha connection? We’ll give you updates as other news comes in. Stay tuned to the ABC soap and don’t forget to check CDL often for the latest General Hospital spoilers, updates and news.