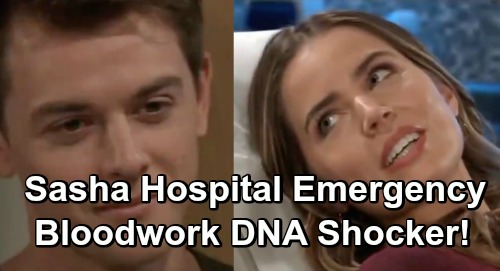 General Hospital (GH) spoilers tease that Sasha Gilmore (Sofia Mattsson) will find herself in need of medical treatment. She’ll land at GH in Friday’s new GH episode, April 26, where Michael Corinthos (Chad Duell) will check on her. Sasha will look over at Michael when he first appears. As she lies back on the exam table, Sasha will grin and offer a reminder. She’ll suggest she told Michael she was no good for him.

Sasha will seem a tad out of it like she might’ve fainted before this meeting. The joke may be Sasha’s way of apologizing for inconveniencing Michael. She certainly won’t want him to worry about her. Regardless, Sasha won’t seem to be in any real danger. The drama will probably come through any tests that Sasha might undergo. She could be moving into risky territory with this trip to GH.

General Hospital fans know Sasha is pretending to be the daughter of Nina Reeves (Michelle Stafford) and Silas Clay (Michael Easton). Three DNA tests have “proven” this so far, but they’ve all been rigged by Valentin Cassadine (James Patrick Stuart). That means any bloodwork that comes up could put Sasha and Valentin’s scheme in jeopardy.

Since Nina is assumed to be family, she could be given updates on Sasha at GH. You can bet she’ll be a wreck, no matter how minor this incident turns out to be. Nina could easily learn something that serves as a red flag and doesn’t quite line up with the medical history Sasha’s supposed to have. It may not even click into place for her yet, but this storyline is all about piling up suspicions and clues.

At some point, Nina will have to accept that she’s been blindly believing Valentin. He always explains away anything that seems off, but how long will he get by with that? Any DNA shocker that results from this GH stay could be another piece of the puzzle for Nina. Valentin may brush this under the rug for now, but the big picture will come into focus soon – most likely during May sweeps.

Of course, General Hospital spoilers say Sasha will struggle to keep her secret from Michael. It could be him who overhears some medical tidbit he shouldn’t. Michael could play a role in helping Nina uncover the truth down the road. At the very least, Michael will create added pressure and the possibility for more mistakes.

Bottom line, this GH trip is concerning. There has to be a reason General Hospital wants Sasha admitted, so it could involve a DNA blunder and another frantic cover-up. We’ll keep you posted as other news comes in. Stick with the ABC soap and don’t forget to check CDL often for the latest General Hospital spoilers, updates and news.