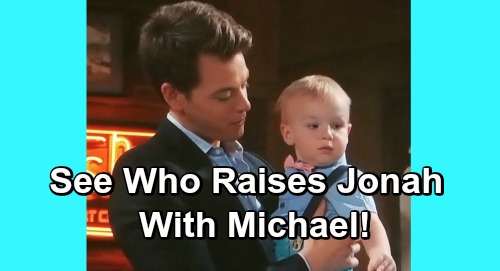 General Hospital spoilers promise that Michael Corinthos (Chad Duell) will be getting his son Jonah Corinthos AKA Wiley Cooper-Jones (Theo and Erik Olson) back when the truth about the baby switch comes out. Who should help Michael to raise his son when he returns home where he belongs?

General Hospital fans know Nelle Benson (Chloe Lanier) is Jonah’s mother, but she also gave him away to keep him from his father. Nelle tried to kill Michael and also killed her fiance Zachary Grant before him. Nelle is not a trustworthy or safe person to live with or to have in the house with a young child.

Hopefully, Nelle will stay in Pentonville after her looming escape and out of Jonah’s life altogether, so she doesn’t get a chance to try to kill Michael or anyone else again.

Sasha Gilmore (Sofia Mattsson) and Michael are friends with benefits but not much more. Sasha has no real ties to Port Charles and might not remain be in town after the truth comes out that she isn’t Nina Reeves (Cynthia Watros) daughter. If Sasha exposes the truth, Valentin Cassadine (James Patrick Stuart) could make her disappear.

Michael probably should not invest in a relationship with Sasha because if she would lie about being Nina’s daughter, she would lie about anything else as well. Sasha seems to be about nothing but a good time, and Michael needs someone who will help take care of his child.

Willow Could Be A Good Parent To Jonah

Willow Tait (Katelyn MacMullen) already loves Jonah, but she believes he is her child. Willow has no idea that her son Wiley died shortly after birth. General Hospital spoilers ask if Willow could love Jonah without using him as a replacement for her son?

Willow would need to grieve the death of her child before attempting to raise another baby with Michael. Willow has gone through the grieving process to an extent, but she has no idea what true grief is until she has to face the truth about her son’s death.

Although Willow would be a great mother to Jonah after she deals with her personal issues dealing with her child’s death, she might not be ready to be anyone’s mother for some time.

Does Michael Need Somebody New?

General Hospital spoilers remind fans that Michael seems always to get mixed up with women who have a ton of baggage. As a father of a young child, Michael needs someone who can devote their time to him and his child without bringing a troubled past with them.

However, Michael hasn’t had good luck with dating apps either. Does Michael need a new woman, or should he be a single father and make up for lost time with his son? General Hospital’s Jonah needs to get to know his family once he is reunited with his father, and he has plenty of family members to help take care of him.

Jonah may need a mother figure in the future, but for now, he will be fine with his father and extended family. Michael has plenty of time to find the love of his life to help raise his child. Who do you think would be the right woman to help Michael raise Jonah once he is returned to his dad? Come back to CDL for all your General Hospital spoilers, news and update!