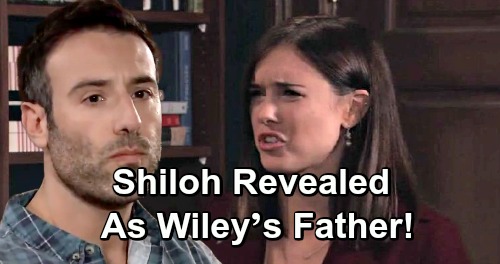 General Hospital (GH) spoilers tease that Shiloh (Coby Ryan McLaughlin) aka Hank may have yet another shocking connection on canvas. First, let’s recap the people Shiloh’s linked to so far. Of course, we have Drew Cain (Billy Miller). Shiloh used to go by Hank back when he knew Drew in Afghanistan. He claims Drew saved his life, but it certainly seems like Shiloh is holding some sort of grudge instead.

That goes against Shiloh’s rules at the cult. He’s all about eliminating negativity, which he was quick to scold Kristina Corinthos-Davis (Lexi Ainsworth) about. She’s another one of Shiloh’s connections along with Oscar Nero (Garren Stitt), who’s been living at the community house. Shiloh is also linked to Daisy (Kelsey Wang), who’s wrapped up in Sam McCall’s (Kelly Monaco) latest mystery.

Jason Morgan is pulled into this through Sam as well as his twin brother, Drew. There are connections all over the place, so this is turning into quite the umbrella story. With that in mind, GH may have one more big reveal. After all, the identity of Willow Tait’s (Katelyn MacMullen) baby daddy has never been exposed.

Alexis Davis (Nancy Lee Grahn) simply claimed it was a one-time deal and that the birth mom insisted he wasn’t in the picture. Willow’s behavior also points to rape, so the facts may be coming together here. Shiloh is clearly a wolf in sheep’s clothing. He may have forced Willow to have sex with him and knocked her up in the process.

That would explain why Willow gave Wiley up when she clearly loves kids. During her last chat with Julian Jerome (William deVry), Willow suggested that maybe she could be in Wiley’s life after all. She thought it might be good for him.

Julian was quick to remind Willow of the complications that made her put Wiley up for adoption. He wondered if Willow had really taken care of those complications. That sounds like more than just being haunted by a rape.

It sounds like Willow could be worried about shady Shiloh getting his hands on her child. She might’ve thought it was best to leave Shiloh in the dark and keep him away from the cult.

Willow also told Chase about some family issues, so that might’ve driven her to become part of this community. Shiloh may have made her felt safe and cared for – at least at first. General Hospital fans can tell that what’s happening with Kristina, too.

Another hint came when Sam wondered if Kristina was sleeping with Shiloh. Kristina shut down the idea immediately and was even a bit offended by it. However, there was a weird vibe after Sam and Jason left in Thursday’s episode, January 3.

Shiloh got pretty intense with Kristina. He wasn’t acting romantic or hateful, but there was an interesting forcefulness. It’s easy to imagine Shiloh crossing the line.

General Hospital spoilers say more Shiloh secrets will be revealed along with more Willow shockers. Will there be some overlap? Do you think Shiloh was Wiley’s father and how would that shake up the baby swap storyline?