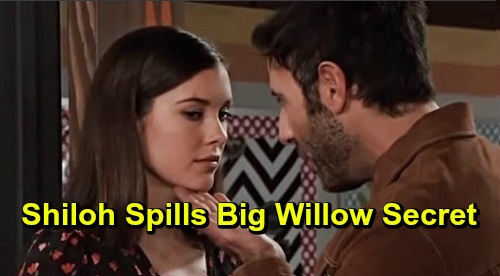 General Hospital (GH) spoilers tease that Willow Tait (Katelyn MacMullen) may be in for some big shockers this fall. GH fans have been waiting anxiously for the big secret to come out about the true identity of Wiley Cooper-Jones (Theo and Erik Olson) so that Michael Corinthos (Chad Duell) finally learns that the baby currently known as Wiley is actually his son, Jonah Corinthos. But of course, once that secret comes out, Willow will learn that the baby she gave birth to tragically died.

As one can imagine, that will be a devastating blow to Willow. But we can’t forget that there’s likely another secret about her life that is likely to come out at any time. GH fans have long suspected that Willow may be the biological daughter of Nina Reeves (Cynthia Watros). Right now, it’s believed that Sasha Gilmore (Sofia Mattsson) is Nina’s long-lost daughter, that is by everyone except for Sasha and Valentin Cassadine (James Patrick Stuart). Sasha and Valentin have been conning Nina all along.

Well, we can’t help but wonder whether the upcoming trial of Shiloh Archer (Coby Ryan McLaughlin) is going to bring any secrets to light. According to General Hospital spoilers, Shiloh will testify in his own defense during his trial – something that Robert Scorpio (Tristan Rogers) is very much looking forward to, and that’s because Robert will get to cross-examine him. But what if Shiloh’s testimony dredges up a lot of personal information about some key Port Charles residents that they’d rather keep private?

Chances are, Sam McCall (Kelly Monaco) and Kristina Corinthos-Davis (Lexi Ainsworth) won’t be thrilled to have Shiloh on the stand going every last detail of what happened between them and the disgraced cult leader. And what about all of the women who gave Shiloh secret pledges…will those potentially come to light if Shiloh takes the stand and blabs away? We can’t forget that Shiloh had a secret pledge from both Willow and from her mother, Lorraine “Harmony” Miller (Inga Cadranel). What if the contents of those pledges see the light of day during the trial?

And what if Harmony’s pledge has to do with Willow’s true identity? If indeed Willow is actually Nina’s long-lost daughter, then that would almost certainly mean that Harmony has been keeping the fact that Willow is adopted from her…and that would be just the kind of information that could be in Harmony’s original pledge to Shiloh from years ago.

And besides, Shiloh has been way too calm about the whole situation with Harmony betraying him. Perhaps he’s planning his revenge by eventually revealing the big secret about Willow not being Harmony’s biological child. Probably the most hurtful time for him to reveal the news would be in a public forum, like a trial. So, could we be looking at a situation where Willow’s status as adopted comes up at Shiloh’s trial?

GH buzz says it’s pretty likely, and it certainly sounds like something that Shiloh would do. Of course, this would all be setting the stage for the even bigger reveal down the line that not only is Willow adopted, but she’s Nina’s daughter. And that would be a huge reveal, given the terrible time that Willow and Nina have had in getting along during the past year.

What’s your take? Do you think that Shiloh will reveal that Willow was adopted? Stay tuned to the ABC soap and don’t forget to check CDL often for the latest General Hospital spoilers, updates, and news.