General Hospital Spoilers: Shiloh’s a Dead Man Walking, Willow’s Rage Out of Control – Will Shiloh’s Former Prey Take Him Down? 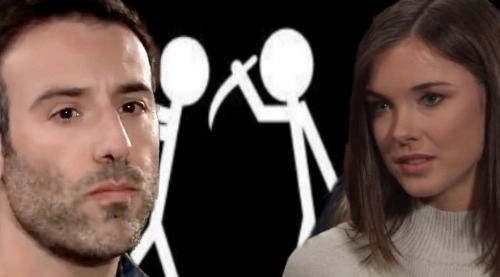 General Hospital (GH) spoilers reveal that deadly hints are already dropping. Shiloh Archer (Coby Ryan McLaughlin) is the kind of character who has no chance of survival. He’s a dead man walking, and the show’s clues definitely back that up.

There’s been lots of lethal talk between Jason Morgan (Steve Burton) and Sonny Corinthos (Maurice Benard), but they know they need to avoid a deadly outcome if at all possible. They’ll go that far if they have to, but they really don’t want Kristina Corinthos-Davis (Lexi Ainsworth) blaming herself and them until the end of time. She could really spin out if they kill her beloved cult leader.

Even Carly Corinthos (Laura Wright) had to ask why this guy was still breathing. Jason explained the tricky situation to her, but it’s clear Carly thinks the world would be a better place without Shiloh in it. Another Port Charles resident feels that way and she just might be the dark horse in this fight to take Shiloh down. Of course, we’re talking about Willow Tait (Katelyn MacMullen).

Willow has spent far too long taking Shiloh’s orders and letting him put fear in her heart. She’s done with Dawn of Day for good, but General Hospital spoilers say Shiloh will keep up his efforts to lure her back. That could be a HUGE mistake based on Willow’s recent comments.

When Willow insisted on meeting Kristina away from the community house, Michael wondered if Willow feared she might get sucked in again. Willow noted that it was quite the opposite. She has so much rage built up that she can’t trust herself not to kill Shiloh.

Is GH foreshadowing a deadly showdown between Shiloh and Willow? It’d be interesting for someone sweet and seemingly weak on the surface to become Shiloh’s worst nightmare. Willow was awfully riled as she told Michael was tired of being passive. She’s ready to be a take charge kind of gal, so Shiloh had better watch out!

Shiloh still has Willow’s pledge from when she joined “The Trust,” but she doesn’t seem concerned about that. When you’ve had Shiloh’s baby and you’re living in fear, that probably puts things in perspective. Willow has already done the whole starting over thing, so it’s not like it’ll be a big deal if Shiloh destroys her reputation. She could just leave town and start over once again.

If Willow were to face legal ramifications, that’s something she’d probably be OK with, too. All Willow cares about is keeping “Wiley Cooper-Jones” safe, so that pledge means nothing now. Willow has kicked off a romance with Harrison Chase (Josh Swickard), but they’re not in all that deep yet. If she has to, Willow would likely be willing to murder Shiloh and get locked up for it.

In other words, General Hospital spoilers say Shiloh had better watch out for his former prey! Will the hunter become the hunted? Will Shiloh regret pushing Willow to her limit? We’ll give you updates as other GH news comes in. Stay tuned to the ABC soap and don’t forget to check CDL often for the latest General Hospital spoilers, updates and news.