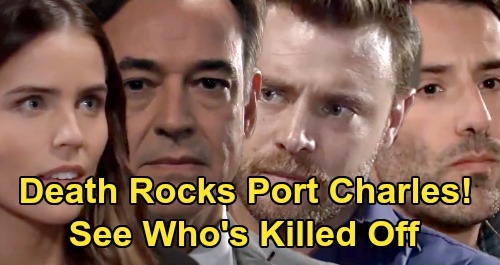 General Hospital (GH) spoilers tease that big trouble is brewing in Port Charles. GH fans can expect several major storylines to heat up in the weeks ahead. GH buzz has it the excitement’s building to a shocking death, but who will the victim be? There are some good options to consider as we await this lethal outcome.

It looks like Cassandra may plan to trade the antidote for something, so Nina Reeves (Cynthia Watros) and Valentin Cassadine (James Patrick Stuart) should hear from her soon. What happens if Cassandra lies about that antidote or Sasha doesn’t receive it in time? It’s possible Sasha could fade away, but there hasn’t been any buzz about her exit so far.

This is a prime opportunity for the truth about Sasha to come out, but it seems like a setup to soften Nina’s reaction. She may not be quite as mad at Sasha since she’ll nearly lose her. Perhaps they could still have a mother-daughter type relationship if Sasha recovers as expected and Nina cools off. If Valentin is forced to expose the truth to save Sasha, that could help him make amends as well.

With all that in mind, we should look at other potential death candidates. Shiloh Archer (Coby Ryan McLaughlin) is one that immediately comes to mind. It wouldn’t be surprising to hear his demise is in the works. Shiloh has kidnapped Sam McCall (Kelly Monaco) one too many times! Jason Morgan (Steve Burton) and Sonny Corinthos (Maurice Benard) may not let this guy live for long.

Another option might be a deadly outcome for Drew Cain (Billy Miller) – although it’d likely be a presumed one. Miller’s exit statement suggested he might be on board with returning someday. Never say never! GH might leave that door open, especially if they intend on bringing a recast in at some point. Even so, Drew’s presumed death would serve as a death to fit the General Hospital spoilers we’re hearing.

We can’t forget about Ryan Chamberlain (Jon Lindstrom) either. If he ultimately escapes with Nelle Benson (Chloe Lanier) like General Hospital has hinted, will he survive the outside world? GH probably needs to put Ryan to rest once and for all. He’s a fun character for sure, but fans seem pretty over Ryan’s story by now.

Bottom line, there are several deadly possibilities as we inch closer to this fatality. Who do you think will bite the dust? Which GH character are you eager to see fade fast? We’ll give you updates as other GH news comes in. Stay tuned to the ABC soap and don’t forget to check CDL often for the latest General Hospital spoilers, updates and news.