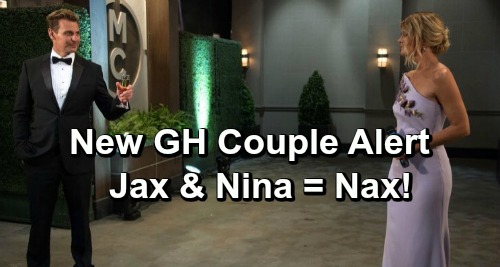 General Hospital (GH) spoilers tease that spark has sizzled and there’s no turning back. GH buzz has been hinting at a possible pairing between Nina Reeves (Michelle Stafford) and Jasper “Jax” Jacks (Ingo Rademacher), but there’s been nothing concrete yet. However, Nina’s reaction to Jax was all the confirmation we need. She was beyond smitten with the Australian hunk.

Nina was so flustered she could barely speak. When she was able to find words, she was just randomly blurting things out. It was like Valentin Cassadine (James Patrick Stuart) flew right out of Nina’s head. Valentin who? Nina looked like she would’ve married Jax on the spot if he’d asked.

Of course, Jax was clearly interested as well. He seemed mesmerized by Nina’s beauty as she strutted away to finish red carpet interviews. Nina and Jax are certainly feeling the chemistry, but are you? General Hospital viewers are already weighing in on social media. Since it’s obvious this pairing is moving full-speed ahead, people are voicing their opinions on whether it’s a good idea.

Some GH fans are all for it! Valentin and Nina’s romance has gotten awfully stale to be honest. Plus, Nina consistently gets lied to and betrayed. How many times can Valentin burn Nina before she stops going back for more?

Jax may not be the perfect man, but he’s not the sinister soul that Valentin can be. Although Valentin is loving with Nina, his dark side is always going to hang over their relationship. Jax represents a sparkly new beginning for Nina. She could build something stable with Jax and really rely on him.

This would also set up a fantastic rivalry between Jax and Valentin. Several viewers are loving that plan on Twitter. One fan gushed, “Love the idea of Nina and Jax, especially how Valentin/Jax are reacting towards each other!” Based on the looks Valentin was serving up in Friday’s episode, he can already sense that trouble’s brewing.

Other General Hospital watchers aren’t keen on the pairing. “I do not want him anywhere near that totally unnecessary character,” said one blunt viewer. Naturally, some GH fans are holding off on deciding. The chemistry could change once Cynthia Watros takes over as Nina, which might shift your opinion one way or the other.

“I’m conflicted about Jax and Nina,” one viewer admitted. “I’ll reserve judgment until the recast.” There’s a good chance this is happening no matter what. Watros is a lovely lady and seems to have serious acting chops, so GH might as well give “Nax” a shot. Nina is sure to be furious with Valentin after the fake daughter shocker, so Jax will be waiting to mend her broken heart.