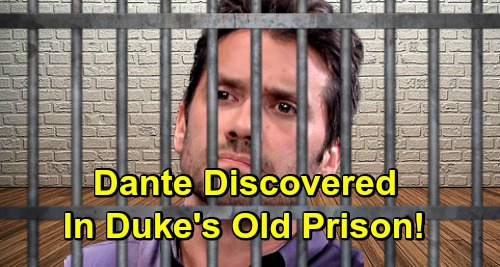 General Hospital (GH) spoilers tease that Dante Falconeri (Dominic Zamprogna) may have been captured. It’s possible he’s being held by Raj Patel (Noshir Dalal) and his associates, so he could certainly use some help. Sonny Corinthos (Maurice Benard) will have to step up and save the day!

On February 21, Robert Scorpio (Tristan Rogers) brought Sonny and Lulu Falconeri (Emme Rylan) some news at GH, but it wasn’t what they wanted to hear. He didn’t fill Lulu in on the whole story, but Sonny heard the ugly truth. Dante has gone rogue and is no longer under the protection of the WSB. They haven’t made contact with Dante lately and have no intention of tracking him down.

On the bright side, Sonny at least knows Dante was last tracked in the area of Ankara, Turkey. He may have recalled hearing that his old friend, Duke Lavery (Ian Buchanan), was held captive in a Turkish prison. Duke was missing and presumed dead for over 25 years, so that’s definitely not a situation Sonny would want for Dante.

Raj and his men may be holding Dante in the same prison that Duke once stayed in. Robert and Anna Devane (Finola Hughes) most likely know the location of that prison. Although Robert didn’t want to start an international incident by trying to rescue Dante, he could at least offer info. Maybe he could point Sonny in the right direction with a little help from Anna. It’d be a nice start!

Cesar Faison (Anders Hove) eventually took Duke from the Turkish prison to a Swiss clinic, where Duke was later rescued. Duke didn’t say much about the prison, but it obviously wasn’t a pleasant place. Most overseas prisons aren’t as humane as the ones in the United States. Dante could be facing terrible treatment and health issues due his time in such harsh conditions.

This ordeal could be taking an emotional toll on Dante as well. General Hospital fans know he’s away from Lulu and the rest of his family, so this potential prisoner drama could be brutal! Will Sonny ultimately track Dante to the Turkish prison where Duke was once held?