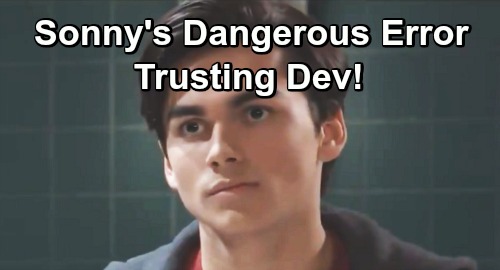 Sonny has had his good friend and associate Brick (Stephen A. Smith) provide Dev with everything he needs to support his new identity of “Devin”, Sonny’s late cousin Brando’s (uncast character) teenage son. GH fans have been asking if Sonny is making a grave error in trusting Dev and and his story.

General Hospital viewers should agree that Carly has been heroically accommodating of Dev, considering Sonny really doesn’t even know him, except as a Turkish orphan kid who helped lead him and Robert Scorpio (Tristan Rogers) to where Dante Falconeri (Dominic Zamprogna) was in Ankara, Turkey last fall at Raj Patel’s (Noshir Dalal) hideout. Dev was right in the middle of the action as gunfire broke out between Raj, Raj’s men, and Sonny and Dante as they escaped, bound for Port Charles!

Dev told Sonny that he came to the United States, and specifically Port Charles and Sonny looking for asylum since Raj’s men had been after him trying to kill him! Carly allowed Dev to live in the Corinthos home even though her daughter Josslyn Jacks (Eden McCoy), who is the same age as Dev is, was a little uncomfortable with the idea.

General Hospital spoilers made it clear that the Corinthos family’s loyal friend and Sonny’s enforcer Jason Morgan (Steve Burton) does NOT trust Dev!

Carly also gave Dev a job at the Metro Court so he would have some money of his own and learn the American ways, although when the school year starts he’s expected to go to high school as other kids his age do. He protested at first but Sonny assured him he would get him a tutor so he could be up to speed academically and not so far behind the other students his age.

With also having a little girl, Avery Corinthos (Ava and Grace Scarola) in the home, and a new baby on the way, possibly with major special needs that the newly discovered spina bifida could bring, that adds to Carly’s at-home responsibilities.

Josslyn is still healing from her grief process over her late boyfriend Oscar Nero Quartermaine (Garren Lake Stitt) and Carly is supporting her emotionally. That is a lot on Carly’s plate already, and now a new teenage boy in the house on top of everything else that she is accepting and trying to help adjust is really “going beyond the call of duty”!

Will “Devin” prove worthy of Sonny and Carly’s love and acceptance, or are Sonny’s eyes particular blinded by a new young man to mentor like he did Stone Cates (Michael Sutton) so long ago?

Will Jason be proven right that Dev cannot be trusted and isn’t what he claims to be, making home a danger to Carly, Joss and Avery? Stay tuned to General Hospital and keep checking General Hospital spoilers for all the latest news, updates and developments!