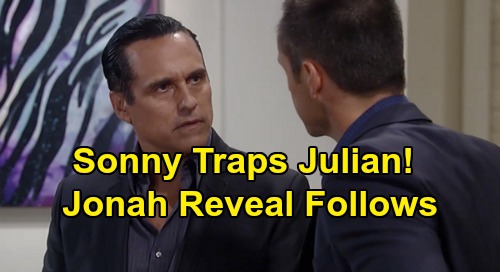 General Hospital (GH) spoilers tease that Sonny Corinthos (Maurice Benard) could be up to something. He doesn’t make a habit of being nice to Julian Jerome (William deVry), even under dire circumstances. Sonny is a fellow mobster and realizes mistakes can happen. Is Sonny setting Julian up to learn his part in the accident?

Sonny Made a Similar Mistake

GH fans will recall that Sonny set up a bomb hit on Julian years ago. Sonny called off the hit but thought for some time that he was behind the death of his son, Morgan Corinthos (Bryan Craig). Sonny and Carly Corinthos (Laura Wright) fell apart over this, which led to Carly sleeping with Jasper “Jax” Jacks (Ingo Rademacher). Sonny knows what he’d do if he wanted to take someone out and suspects Julian would do the same.

Sonny Is Not Julian’s Friend

General Hospital viewers know Sonny doesn’t like or trust Julian. Plus, Julian’s been acting incredibly nervous at GH. Sonny can probably see the signs of guilt all over Julian’s face. Although Sonny has no idea why Julian would want to kill Brad Cooper (Parry Shen), he may be determined to find out.

Sonny knows Julian would never open up to him, so he may be setting a trap. He invited Julian over to see his grandson, “Wiley Cooper-Jones” (Erik and Theo Olson), which could be step one in getting Julian to drop his guard. Sonny could even bug the place in hopes that Julian might confess something on a future visit.

Regardless, Sonny’s making it seem like he’s softened toward Julian due to his sorrow. In reality, he may be setting Julian up for a huge fall. Julian may not realize he’s potentially being targeted until it’s too late.

Julian Hostility Toward Brad Is Huge

Julian didn’t even try to hide his hostility toward Brad after the accident. His behavior raised red flags for Lucas Jones’ (Ryan Carnes) family as well as Harrison Chase (Josh Swickard). Has Chase secretly asked Sonny for his help to catch Julian? Even if Chase is working through this on his own, Sonny has a motive to seek the truth. He can see how much pain Carly and her loved ones are in right now.

Will Sonny Get Julian’s Confession?

Sonny also seemed curious about Brad and what he’s hiding. He may assume that’s connected to why Julian went after him. Now that Sonny is possibly involved, the walls could close in on Julian sooner than he expects.

This could even lead Sonny to clues about “Wiley Cooper-Jones’” real identity. “Wiley” is actually Sonny’s grandson, not Julian’s. It’d be a great twist if Sonny’s quest for answers brought him to an unexpected truth about Jonah Corinthos.

Bottom line, Julian’s going down one way or another. Will Sonny hurry the process along? The cops haven’t gotten very far, so it may take a mobster mind like Sonny to pull this off! General Hospital spoilers say some hot drama’s ahead no matter what, so stay tuned. We’ll give you updates as other GH news comes in. Stick with the ABC soap and don’t forget to check CDL often for the latest General Hospital spoilers, updates and news.