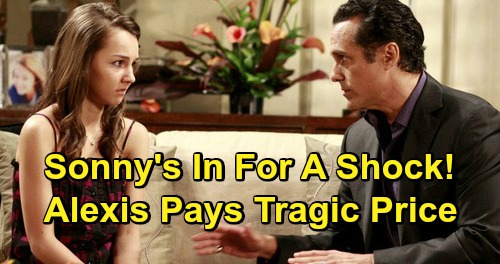 General Hospital (GH) spoilers reveal that Kristina Corinthos-Davis’ (Lexi Ainsworth) life has become a total mess. Of course, things have never exactly been uncomplicated for Kristina. She’s always had drama going on, including crisis after crisis within her own family. That’s why it’s puzzling for the assumption to be that Kristina’s pledge must’ve been about Sonny Corinthos (Maurice Benard).

No one in Kristina’s life is innocent except maybe Molly Lansing-Davis (Haley Pullos), so why do Sonny and those closest to him think this is specifically about him? Kristina is in the dark on almost all of Sonny’s business dealings. How would she have found out what Sonny works so hard to hide?

If the cops can’t score enough to lock Sonny up, how is Kristina going to score enough to rat him out to Shiloh Archer (Coby Ryan McLaughlin)? The girl fell hook, line and sinker for Shiloh’s weird philosophies. She can’t even see that this is a dangerous cult, so she’s not exactly perceptive these days. It’s tough to believe Kristina could offer anything that would stick against Sonny.

All of Sonny’s information is encrypted. Kristina has no access to any of Sonny’s business files. How does Sonny think Kristina would have gotten any dirt to spill? Does Sonny have a mole who would pass on inside info to his daughter? GH viewers would hope after Dante Falconeri (Dominic Zamprogna) got into the organization, Sonny would be more careful about that.

Unless Joe Scully revealed some mind-blowing secret about Sonny when he tried to kill Kristina years ago, she would have nothing on him. Kristina could’ve come up with something on Jason faster than she could prove anything against Sonny. Everyone knows Jason was supposed to have thrown Alcazar off a bridge years ago, so Kristina could have stumbled across evidence concerning that case.

Jason also purposely targeted Carter in prison and killed him over Michael. Jason threatened the young boy in Mexico that hit Michael as well. Kristina could undoubtedly come up with something to use against Jason if she wanted.

General Hospital fans know Sam McCall has a shady past at best, and Kristina knows about it. In fact, Kristina’s the one who told Daisy Kwan (Kelsey Wang) about Sam’s history, which led to Shiloh’s email drama. Sam even conned a bank manager with Jason and Damian Spinelli’s (Bradford Anderson) help not too long ago.

Kristina has no reason to go after Sam since she’s the only one showing an interest in DoD. Still, the point is it’d be easier to score dirt on her. Even Sam’s a better option than Sonny!

However, Alexis Davis has covered up for Kristina all of her life and is still doing it. She just paid Julian Jerome (William deVry) off so Kristina could keep her job at Charlie’s Pub. Kristina is honestly biting the hand that feeds her and doesn’t care.

What will Kristina do when Shiloh turns her mother in because of her confession? Will she feel the least bit sorry for Alexis’ pain? Time will tell, but Sonny needs to open his mind to other options. Perhaps he’s so used to the PCPD blaming him for everything that he can’t help but assume this is about him, too.

General Hospital spoilers say Sonny will get a clue eventually – and so will Alexis. That’ll actually be more like a rude awakening since Kristina’s trust offering involves Alexis murdering Kiefer Bauer (Christian Alexander)! We’ll give you updates as other GH news comes in. Stay tuned to the ABC soap and don’t forget to check CDL often for the latest General Hospital spoilers, updates and news.