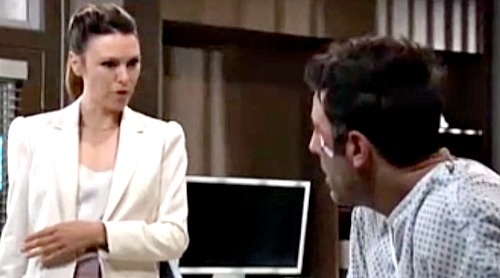 General Hospital (GH) spoilers tease that Margaux Dawson (Elizabeth Hendrickson) will try to suppress evidence on Shiloh Archer’s (Coby Ryan McLaughlin) orders. Of course, Sonny Corinthos (Maurice Benard) is not about to let that happen. He’s got leverage now, so he’ll use that to his advantage soon enough.

Sonny can get Margaux to cooperate through her pledge. He’ll undoubtedly demand that she prosecute Shiloh, so Margaux may have no choice. Shiloh told Margaux that Sonny manufactured evidence against him. Margaux believes Shiloh to an extent, but she also knows he’ll use her pledge against her if she doesn’t do what he asks. What she doesn’t know is that Sonny is now in control of that pledge.

Sam’s recording of everything that happened is legal in the state of New York. Nevertheless, Margaux will try to ignore it and let Shiloh get away with his crimes. Fortunately, General Hospital spoilers say Sonny will be ready to fight back. Shiloh went after his daughter, and Sonny is determined to make him pay.

Shiloh could send both Margaux and her mother to prison because of her trust offering – at least he could when he had the pledge. Now Sonny’s the one who could make trouble for Margaux and her mom. Sonny helped set up Margaux’s mother so the DA would know the truth. He knew Margaux’s mom was dating his boss and figured out that she wanted her husband dead.

GH viewers know Sonny never admitted to killing Margaux’s father, even though he did. However, Sonny knows Margaux covered for her mother, and now he has proof. As much as Sonny doesn’t want to use it, he’ll be forced to get justice for Kristina Corinthos-Davis (Lexi Ainsworth) and all the other women who weren’t so lucky to have escaped from DoD.

Margaux doesn’t believe the Shiloh would drug or rape anyone, but she can’t overlook the fact that Dr. Monica Quartermaine (Leslie Charleson) ran drug tests to prove it. Sonny also has Brick’s evidence that Kristina was drugged. Does Margaux remember sleeping with Shiloh after her initiation? Will Margaux realize she was raped after joining The Trust? Those are possibilities, but there’s a chance Margaux simply hasn’t been initiated yet.

Regardless, Sonny will threaten Margaux with her pledge when she fails to prosecute Shiloh. Will Sonny win this battle and get this rapist off the streets? Will some of the other women have to come forward first?

General Hospital spoilers say the ultimate Shiloh takedown plan will form soon. Jason Morgan (Steve Burton) and Sam McCall (Kelly Monaco) will set it in motion, so the Shiloh drama isn’t done yet. Despite Sonny’s efforts to control Margaux, it should take a bit more to truly destroy his newest enemy.

GH fans won’t want to miss the twists and turns ahead. We’ll give you updates as other news comes in. Stay tuned to the ABC soap and don’t forget to check CDL often for the latest General Hospital spoilers, updates and news.