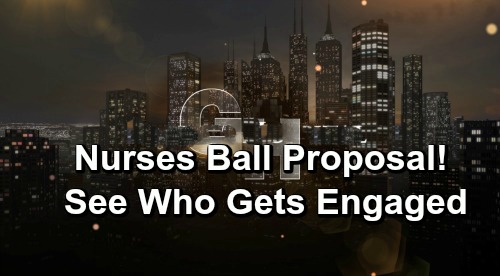 It Could Be Finn

General Hospital’s Hamilton Finn (Michael Easton) has been trying to propose to Anna Devane (Finola Hughes) for some time now but hasn’t gotten up the nerve to do it just yet. Finn and Anna are sure to be at the ball, or at least one of them is, Will Finn get past his nerves and propose at the nurse’s ball? Will Anna accept if Finn does propose, or will she deny herself the happiness that could wait?

Robert Has The Ring

General Hospital’s Robert Scorpio (Tristan Rogers) has the ring that Finn bought to propose to Anna. Finn has repeatedly called in an attempt to get Robert to return the ring. Has Robert realized that he can’t live without Anna any longer and propose to her himself?

Will Kevin Propose To Ava?

General Hospital’s Kevin Collins (Jon Lindstrom) could feel the need to up the ante when it comes to capturing Ryan Chamberlain (Jon Lindstrom)? Kevin and Ava are working together to drawn Ryan out in the open but will it work? Will this proposal seal the deal with Kevin and Ava’s plan and bring Ryan out in the open? This plan could be what it takes to reel in the big one.

Could Julian Want To Take The Next Step?

General Hospital’s Julian Jerome (William DeVry) could pop the question to Kim Nero (Tamara Braun). Julian could be afraid that Kim will leave town after Oscar’s death and use a proposal as a way to stop

her. However, Kim is far from ready to make any life changing decisions right now; it is too close to Oscar’s death to be making any plans for the future.

Jason Could Surprise Everyone

No matter who’s getting engaged it will undoubtedly be a riveting show. Stay tuned for more details and updates of the upcoming General Hospital Nurses Ball 2019