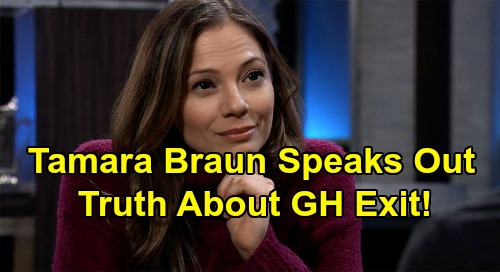 General Hospital (GH) spoilers reveal that Tamara Braun is speaking out after her recent exit. GH fans know Tamara Braun was let go from GH and recently made her on-air departure. In an interview with Soap Opera Digest, Braun gave an enlightening and refreshingly honest interview about her stint at General Hospital. She didn’t hold back on how she feels about Kim and the direction the writers chose to take her in.

Sometimes actors can get a little too close to their characters, which often leads to them defending them to the bitter end. It’s natural for someone to be protective of a character he or she brings to life, but some cast members can take that too far and completely ignore issues in the writing. Not Braun! Like most GH viewers, she agrees that Kim went down a weird path and could see her exit coming from a mile away.

Braun was asked about Kim drugging Drew Cain (Billy Miller) and trying to force him to make a baby with her. She admitted that was a negative turning point, and she knew it’d be hard to recover from. Braun said, “Yeah, actually that was the first time that I was like, ‘Oh, they’re going to write me off.’” She explained that she shared her suspicions with co-star William deVry (Julian Jerome), who tried to shut down her concerns.

Nevertheless, Braun suspected Kim’s time at GH would come to a close. She thought Kim’s attempt to drug Drew into sleeping with her was “so out of character.” Even so, Braun was a bit taken aback since Executive Producer Frank Valentini made promises he never delivered on. “Well, I was a little surprised, because weeks before, Frank told me that I had a really big story coming up that he was really excited about,” Braun said.

The plan apparently fell through since Braun eventually learned she was being written out. Braun talked about being proud of the work she did after Oscar Nero Quartermaine’s (Garren Stitt) death. She was disheartened when the writers later chose to use Kim’s grief as an excuse for behavior that was…well, inexcusable!

Braun implied that if Kim’s character was going to take that kind of turn, they should’ve just let her be more of a crazy villainess. “But there was always some sort of excuse,” Braun said. “It made not just what the character was doing unlikable, but just the character so unlikable.”

Braun suggested she did the best she could with the material given, but there was no reason for anyone to sympathize with Kim anymore. She even argued that from a viewer’s perspective, she would’ve been on “Team Liz” during the war over “Drew Cain” aka Franco Baldwin (Roger Howarth).

It’s great to see Braun recognizing the problems we all saw with Kim and not glossing over them just because she played her. Braun’s a powerhouse actress and a true professional. Her run may be over, but she pointed out that she’d be open to joining another soap. Braun also assured fans that she was quite grateful for their love and support. She’ll undoubtedly continue to go far in her career!

As for what’s next in Port Charles, General Hospital spoilers say “Drew” will move forward with his memory reversal procedure plans. He’ll do his best to bring Franco back to Elizabeth Baldwin (Rebecca Herbst) and her boys. We’ll give you updates as other GH news comes in. Stay tuned to the ABC soap and don’t forget to check CDL often for the latest General Hospital spoilers, updates and news.