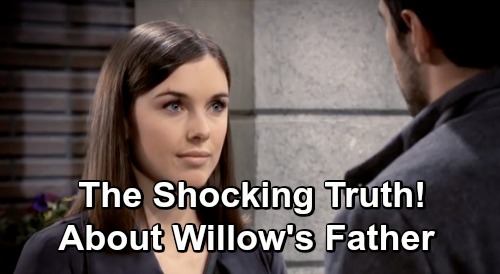 However, Willow finally talked about her father as well. She mentioned how her dad was more skeptical than Harmony, but he came around on Shiloh’s philosophies eventually. Even so, Harmony was always the truly passionate one when it came to Dawn of Day. She was the first woman to join “The Trust” and sleep with Shiloh, which broke Willow’s father’s heart.

Harmony ultimately drove Willow’s dad out of DoD, and he passed away shortly before Willow’s initiation…or did he? Is there a chance he might still be alive? Perhaps Harmony simply told Willow that to get her to focus on Shiloh. It wasn’t until Shiloh started favoring Willow that Harmony’s anger revved up.

Sometimes when characters tell stories like this, it serves as a hint about a debut that’s brewing. It’s possible we’ll see Willow’s father reenter her life at some point. Maybe he could even play a role in exposing Willow’s illegal adoption, which we assume happened since all signs point to Willow being Nina Reeves’ (Michelle Stafford) biological daughter.

The weird part is Dr. Neil Byrne (Joe Flanigan) had a wife and daughter in the past that he doesn’t want to talk about. That’s led some fans to believe Neil could be Willow’s dad, but they’ve already shared scenes together and had no reaction.

Since Willow’s dad knew her when she was older, he certainly would’ve recognized her. Willow looks exactly the same as that pic that was taken just before her initiation. Still, it’s odd that GH was playing out Neil’s discomfort over his daughter while Willow was opening up about her father.

Some General Hospital viewers have suggested that Neil might’ve had plastic surgery, but that seems awfully extreme. It’d be easier to just flee the country if the plan was to get away from Shiloh. Perhaps GH just assumes fans have forgotten about the safehouse interaction. They may want to use this as a red herring. Then again, maybe they were just trying to set up some parallels.

Regardless, there seems to be more to the story of Willow’s father. Even if he’s really dead, he might’ve been murdered by Shiloh or one of his minions. That may be something that could come back into play and make trouble for Shiloh if new evidence surfaces.