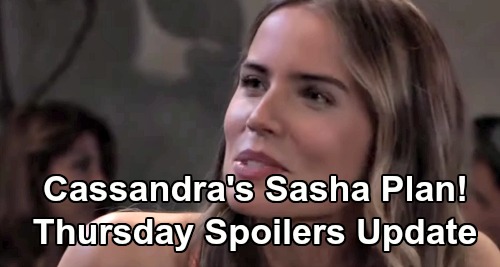 General Hospital (GH) spoilers update for Thursday, August 1, tease that viewers will be in for some interesting scenes during the dinner party at Wyndemere. Someone’s got a martini that Valentin Cassadine (James Patrick Stuart) spiked with truth serum, but neither Valentin nor Nina Reeves (Cynthia Watros) knows who ended up with the drink. Since Nina’s just basically downed her martini, there’s not much she’ll be able to do about it if she’s the one who got the truth serum.

Interestingly, in Thursday’s GH previews, Nina is shown acting a little goofy, but we should keep in mind that GH spoilers also say that Hayden Barnes (Rebecca Budig) will be making a fool out of herself at the party. She might just wind up being the one who ingested the truth serum, and if so, who knows what she could reveal!

As GH viewers know, Hayden’s got some big secrets right now. First off, she and Jasper “Jax” Jacks (Ingo Rademacher) are on a mission to retrieve something from inside of Wyndemere. They don’t know exactly where this thing is, but since Hayden made a beeline to an office inside the castle, it’s likely that they’re looking for some sort of document or something else that would be normally kept in an office.

But of course, Hayden has another secret that relates directly to Hamilton Finn (Michael Easton) – who just happens to be an impromptu guest at Wyndemere for the evening. As GH viewers know, Finn’s stuck at the castle until the storm passes, and there’s a lot Hayden’s not telling him. She was pregnant when she last left Port Charles, so there’s likely a Finn mini-me out there somewhere. And if Hayden was indeed the one to get the truth-serum-laced drink, then she could end up spilling quite a bit at this party!

It should be interesting to watch this party unfold, as it should become clear relatively quickly who got the truth serum and who didn’t…depending on who starts acing buzzed and gets really talkative. We know it can’t be Valentin or Finn, but everyone else is fair game, and it should prove to be quite informative and perhaps a bit comical…and even explosive, depending on any “truths” that may be told!

Meanwhile, on the new episode of GH on Thursday, August 1, Cassandra Pierce (Jessica Tuck) will be on the move. She’s just encountered an unsuspecting Sasha Gilmore (Sophia Mattsson) and Michael Corinthos (Chad Duell) in Puerto Rico, and she had a little fun bantering with them. But on Thursday’s episode, she’ll have some commands for an unknown person on the other end of the phone.

Cassandra will tell whomever she’s talking to not to say anything, but just to listen. Perhaps she’ll want to relay that she’s got an eye on Nina’s daughter. It can’t really be a coincidence that Cassandra turned up in Puerto Rico and struck up a conversation with Nina’s presumed daughter, can it? Perhaps Cassandra has a nefarious plan in mind for Sasha.

And who knows, the person she’s talking to could be that mystery man that Robert Scorpio (Tristan Rogers) said that she was spotted with overseas. Perhaps we’ll get some more information about who that man might be, now that Cassandra’s back on canvas. At any rate, it should be interesting to see what Cassandra’s got up her sleeve and what exactly took her to Puerto Rico.