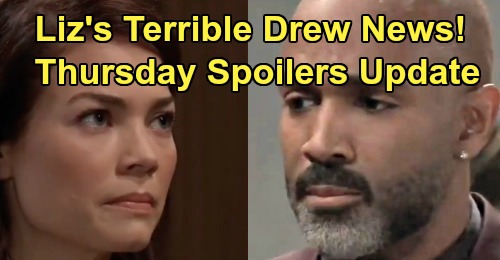 General Hospital (GH) spoilers update for Thursday, August 22, tease that Kim Nero (Tamara Braun) will be shaken up after her conversation with Franco Baldwin (Roger Howarth). It’s eerie to look at Franco’s face and hear him talk about all these things he remembers as Drew Cain (Billy Miller). Kim will be flustered enough to bump up the timeline of moving. She’ll tell Julian Jerome (William deVry) they could leave for Manhattan tonight.

However, Julian will push Kim to take a breath and let him know what’s going on. He’ll realize there must be a reason for this rush to get out of town. Kim should open about how troubled she is and get some support. At GH, Hamilton Finn (Michael Easton) will smile and admit he’s glad someone came home. There’s a good chance Finn will confess this to Hayden Barnes (Rebecca Budig) on Thursday.

Anna Devane (Finola Hughes) is set to return soon, but it doesn’t look like it’ll be in this episode. Plus, Finn will have a rather calm and content reaction to this person. He won’t seem as excited as he’d be about a brand-new arrival. Finn will likely just suggest he’s happy to have Hayden around again.

Other General Hospital spoilers say Dustin Phillips (Mark Lawson) will surprise Lulu Falconeri (Emme Rylan). They’re walking into a trap since Maxie Jones (Kristen Storms) called for Dustin to be Lulu’s driver. Dustin will tell Lulu he’s sorry, but he’ll quickly rethink his stance. He’ll admit he’s not so sorry after all since this means more bonding with Lulu.

Lulu may insist she won’t be great company this evening. Her divorce to Dante Falconeri (Dominic Zamprogna) is now final, so she’s still processing and wondering what’s next. Dustin will understand why Lulu’s upset, but he’ll do his best to cheer her up. Once their together wraps up, Lulu should feel a little lighter and a whole lot closer to Dustin.

Elsewhere, Peter August (Wes Ramsey) will think he needs to be honest with Maxie. He’ll insist there’s something she should know, but Maxie will force him to hold that thought. General Hospital spoilers say Maxie will be called away, so Peter will have a chance to reconsider. He’ll ultimately decide it’s too risky to fill Maxie in on his Helena Cassadine (Constance Towers) connection, so he’ll keep his mouth shut.

Of course, that’ll still leave Shiloh Archer (Coby Ryan McLaughlin) with leverage and Peter with a big problem. Will Peter help Shiloh with an escape plot? Regardless, Shiloh may find another helper on Thursday. He’ll meet Nelle Benson (Chloe Lanier), but she should recognize his name if she hears it. Harmony Miller (Inga Cadranel) explained all the crazy cult drama to Nelle and mentioned Shiloh’s name.

Nelle feared for “Wiley Cooper-Jones” after she heard that story, which led to a near confession to Michael Corinthos (Chad Duell). However, Nelle won’t seem as rattled once she’s facing Shiloh – and there could be a couple reasons why. This chat may happen before she learns Shiloh’s identity. Then again, seeing Shiloh locked up like this may convince Nelle he’s a screwup and not a threat.

Whatever the case, Shiloh and Nelle might become allies since they both want out of prison. Ryan Chamberlain (Jon Lindstrom) could make this an escape trio and set up some juicy Pentonville bombshells. Naturally, all three of them need to be careful since none of them can be trusted!

Next, Ava Jerome (Maura West) will be asked about Franco Baldwin (Roger Howarth). Franco himself will grill Ava about this body he feels he doesn’t belong in. He’ll want to know Franco’s story, but Ava may be hesitant to tell him. She might point out that sometimes ignorance is bliss. Ava will want to make sure Franco’s truly ready to hear the atrocities in his own history.

Franco will likely tell Ava to go ahead, but how will he react to her news? It should be tough for Franco to associate himself with those crimes. He remembers being a war hero, so he’ll feel disconnected from Franco’s actions and perhaps emotionally unaffected – at least for the most part. Franco should feel for the victims as human beings, but the guilt part may be removed.

Finally, Curtis Ashford (Donnell Turner) will have some updates for Elizabeth Baldwin (Rebecca Herbst). He’ll reveal a message that Drew asked him to pass along, so he may explain that the money was found. Curtis may add that Drew is flying to Afghanistan and will make sure the funds are in the right hands.