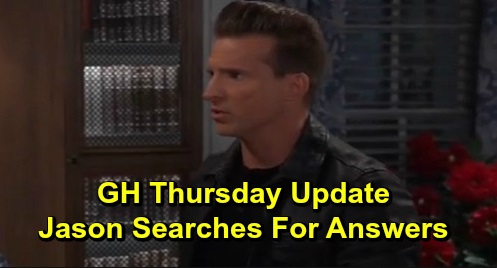 General Hospital (GH) spoilers update for Thursday, December 12, teases that Ryan Chamberlain (Jon Lindstrom) will face Harrison Chase’s (Josh Swickard) questions. At Pentonville, he’ll still be holding the bloody scalpel he used on Nelle Benson (Chloe Lanier). Ryan will insist this isn’t what it looks like, but Nelle will undoubtedly start spinning a “woe is me” story. A poor delicate flower like Nelle is so vulnerable behind bars!

Of course, this is all an elaborate charade cooked up by the murderous duo. Ryan assured Nelle they were “abso-totes” friends, so he was willing to help her stage this attack. In return, Nelle plans to give Ryan loads of Ava Jerome (Maura West) pics and serve as his link to Port Charles. However, that can only happen if their plot pays off.

Chase has learned to be suspicious of every word that comes out of Nelle’s mouth, so that’s a strike against her. On the other hand, Ryan killed his cellmate not too long ago – and now Nelle’s bleeding on the floor. Chase may suspect there’s more to this than meets the eye, but it could be tough to prove it.

Other General Hospital spoilers say Mike Corbin (Max Gail) will get a visit from Josslyn Jacks (Eden McCoy) and Dev Cerci (Ashton Arbab). GH fans know Mike doesn’t recognize his loved ones most of the time, so it doesn’t look like he’ll have a clue who Joss is. Mike will end up snatching Dev by the arm as he asks the teens if they’re going to break him out.

If Mike gets upset, that could be difficult for Josslyn to handle. Luckily, Dev will be there to get Joss through this crisis. They’ll strengthen their bond during this trip to Turning Woods, so that’s good news at least. As for Sonny Corinthos (Maurice Benard), he’ll be forced to examine his true motives. Michael Corinthos (Chad Duell) will want Sonny to think about Mike’s feelings in all this. Would Mike really want Sonny to hang on?

If Mike could speak for himself, he’d probably assure Sonny of his love and tell him to let go. Mike wouldn’t want Sonny fighting a battle he’s not going to win. Sonny could waste valuable time by trying to delay the inevitable. He needs to savor every last moment with Mike and prepare to eventually say goodbye.

Next, let’s talk about Sam McCall’s (Kelly Monaco) parole hearing. Jason Morgan (Steve Burton) will find Ned Quartermaine (Wally Kurth) and wonder if there are updates. Whether Ned has any to pass along or not, it looks like Sam’s nightmare will continue.

Back at Pentonville, Sam will look weary as she speaks with someone over the phone in the visiting area. She’ll ask what other choice she has, which suggests the choice she’s being forced into isn’t a good one. Sam won’t be the only one going through a rough time on Thursday. At GH, Brad Cooper (Parry Shen) will struggle to deal with all his fears and regrets.

During a chat with Willow Tait (Katelyn MacMullen), Brad will admit he wishes he could undo his mistakes. He’d like to take back everything that put him in the car that night with Lucas Jones (Ryan Carnes). That probably includes stealing Michael’s son, but he can’t fix things without blowing up a lot of lives.

Brad will keep quiet for now, but things could still blow up if Lucas awakens and remembers Brad’s confession. Nevertheless, Brad would give anything to see Lucas open his eyes. Even if their relationship can’t survive the devastation to come, Brad just wants to know Lucas will be OK.

Michael will get the assistance he needs in Thursday’s episode, which could involve Willow helping with “Wiley Cooper-Jones” (Erik and Theo Olson). General Hospital spoilers say Willow and Michael will grow closer in the weeks ahead, so it’ll be interesting to see if anything romantic is brewing. We’ll keep you posted as other GH details emerge. Stay tuned to the ABC soap and don’t forget to check CDL often for the latest General Hospital spoilers, updates and news.