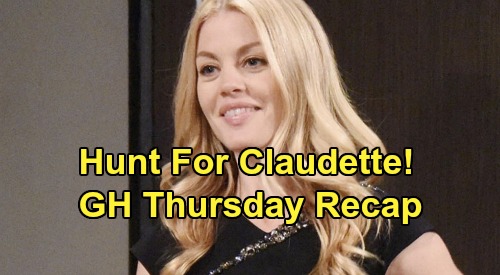 General Hospital (GH) spoilers recap for Thursday, December 19, reveal that Sonny Corinthos (Maurice Benard) confided in Jason Morgan (Steve Burton) about what Carly Corinthos (Laura Wright) was keeping from him. He told Jason that Jasper “Jax” Jacks (Ingo Rademacher) was into something that he shouldn’t be into and that Carly was protecting hm. Jason seemed determined to get to the bottom of the whole thing.

Meanwhile, Carly and Jax caught up at GH and Carly urged Jax to call the cops and turn Nikolas Cassadine (Marcus Coloma) in. Jason then walked up in the middle of their disagreement, noticing that something big was going on between then. After Jax left, Carly noted that Jax was into something illegal and that if Sonny finds out he’ll have him deported.

Jason and Carly then had an animated conversation about the whole thing, with Jason offering to fix the situation. Carly ultimately said that if the situation wasn’t wrapped up by New Year’s Eve, then she’d tell him what was going on. They didn’t notice Sonny noticing their conversation from afar – Sonny then got on the phone and told someone that he needed their help because Carly was in trouble.

At the Jerome Gallery, Ava Jerome (Maura West) held Nikolas at gunpoint as Nikolas asked if the codicil had burned with the portrait of Helena Cassadine (Constance Towers). Ava didn’t want to answer, though, so the two bantered back and forth for a while. Turns out Nikolas was picked up after Valentin Cassadine (James Patrick Stuart) shot him by a yacht. Ava got all the details and the two argued for a while.

Ultimately, Ava admitted that she hid the portrait in plain sight by covering it up with another painting, and that she indeed had the codicil somewhere in her possession, and that she wanted Spencer Cassadine (Nicolas Bechtel) to get his fortune, but that there were terms to be met.

Over at the Metro Court, Lucy Coe (Lynn Herring) met with an angel investor about Deception, when she suddenly pulled Sasha Gilmore (Sofia Mattsson) into the conversation as the new face of Deception. The investor wasn’t entirely on board, but Sasha impressed her with her vision for the company. After the investor left, Sasha and Michael Corinthos (Chad Duell) sat with Lucy for a little chat.

Sasha said that she’d only be the face of Deception if she got a stake in the company and had a say in the product. Michael agreed to be Sasha’s impromptu agent and together they negotiated Sasha a 30% stake in Deception. That didn’t thrill Lucy, but she agreed in order to get Sasha on board, and the women happily shook hands.

Meanwhile, at Wyndemere, Nina Reeves (Cynthia Watros) confronted Liesl Obrecht (Kathleen Gati) about helping Valentin pass Sasha off as her daughter. After some prodding, Liesl admitted that she knew how Valentin rigged the initial DNA test, and how he took a swab from Madeline Reeves’ (Donna Mills) body. Liesl apologized and gave Nina a sample of Madeline’s hair, so that she could rerun the DNA tests if she wanted.

Lulu then arrived at the castle, and she and Valentin argued in the foyer. Valentin accused Lulu of bad parenting and Lulu vowed to prove to the family court that Valentin was a danger to Charlotte. Back at Charlie’s Pub, Laura revealed to Kevin the piece of the story about Charlotte identifying Nikolas as being her bodyguard. Kevin thought that might have been a symbolic choice on Charlotte’s part, since if Nikolas were alive, then a source of tension between Valentin and Lulu would be gone.

Finally, Jax caught up with Curtis at the pub. They agreed that Curtis would go on a mission to seek dirt on Valentin – both for Jax and to help Lulu with her custody case. Jax then gave Curtis a photo of Charlotte’s surrogate Claudette Beaulieu (Bree Williamson) and asked Curtis to find her.