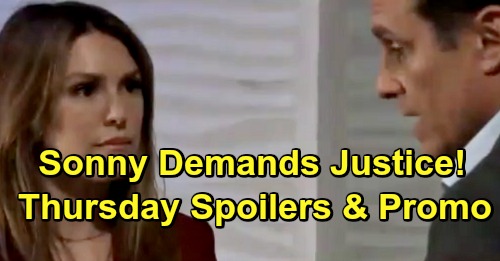 General Hospital (GH) spoilers for Thursday, February 7, tease that Dr. Terry Randolph (Cassandra James) will deliver Oscar Nero’s (Garren Stitt) latest test results. She’ll seem chipper, but she may just be trying to keep Oscar calm and comfortable. Regardless, Oscar’s prognosis will remain grim. There’s a chance Oscar will be given more time than he expected, but death is still inevitable for the sick teen.

Drew Cain (Billy Miller) and Dr. Kim Nero (Tamara Braun) will do whatever they can to support their son. They’ll hope to be a source of strength during this difficult time. However, just because they’re bonding as parents doesn’t mean they’re getting back together – not yet anyway. Kim chose to reunite with Julian Jerome (William deVry), so he’ll gloat during his next chat with Josslyn Jacks (Eden McCoy).

Julian will declare that Josslyn’s little plan has come to and end. She’ll be confused, so Julian will explain that he couldn’t fight his feelings for Kim. He’ll assume Kim felt the same since they’re now an item again.

Over with Elizabeth Webber (Rebecca Herbst), she’ll spread the word of Franco Baldwin’s (Roger Howarth) arrest by phone. Liz will fill Scott Baldwin (Kin Shriner) in on the full situation along with anyone else who needs to know. Meanwhile, a frustrated Franco will hurl threats. He’ll contend that when he’s done suing Jordan Ashford (Briana Nicole Henry) and the PCPD, he’ll own Port Charles!

Ava Jerome (Maura West) will get the stunning news as well. She’ll learn the police have arrested the killer, so she’ll be pleased until she learns who they believe it to blame. Ava be in shock at first, but it looks like her rage will return eventually. Since she’s so riled about Kiki Jerome’s (Hayley Erin) murder, Ava may turn against Franco just as fast as the cops.

Other General Hospital spoilers say Sonny Corinthos (Maurice Benard) will warn Margaux Dawson (Elizabeth Hendrickson). He’ll hear about Franco being in custody and express his approval. Sonny will insist that he doesn’t want Franco getting away with it again, so he’ll hope the charges stick this time. He’ll believe Margaux will do the world a favor by putting Franco behind bars permanently.

Of course, GH fans know poor Franco isn’t responsible. Ryan Chamberlain (Jon Lindstrom) is simply manipulating the situation to make Franco look like the culprit. How long will Ryan deceive Jordan and her team? General Hospital spoilers say things will get worse for Franco before they get better!