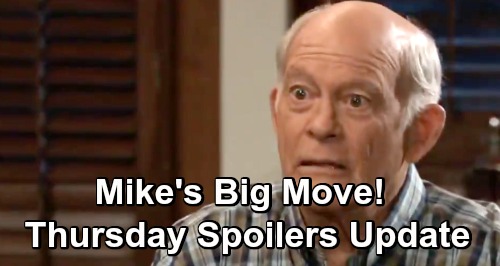 It seems likely that this involves Aiden Webber (Jason David) and some strategy to help him. Jake may listen to Franco’s idea and decide it would backfire in a big way.

Franco’s been bonding with Aiden lately, but he doesn’t know the whole truth of what goes on at school. The same goes for Elizabeth Webber (Rebecca Herbst), who’s doing everything she can to love and support Aiden.

Franco will keep listening and learning during his next baking session with Aiden. He’ll hope Aiden’s walls will keep coming down as the kid does something he enjoys.

At GH, Oscar Nero (Garren Stitt) will have a deep conversation with his mom. Dr. Kim Nero (Tamara Braun) will insist she was worried sick, so Oscar will be sorry he scared her. He had a seizure during the catacombs drama, which brought double the trouble.

Kim may ask Oscar to promise he won’t run off again. They both know Oscar’s time is running out, but Kim at least wants to savor the days he has left.

Oscar also wants a proper goodbye, but he doesn’t want to die with regrets either. He’ll let Kim know that and try to find the right balance in his final weeks. Josslyn Jacks (Eden McCoy) will also apologize in Thursday’s new GH episode, January 24. She’ll be a mess since her adventure with Oscar turned into such a disaster.

Joss will likely offer an apology to Drew Cain (Billy Miller), Kim and maybe even Oscar. She may think she was a bad influence on him since she fought so hard to fulfill his wish. Jason Morgan (Steve Burton) is also at risk thanks to that whole ordeal. He could drown if Sam McCall (Kelly Monaco) can’t get to him in time, but she thankfully will.

Sam will pull Jason out of the water on Thursday and drag him to safety. Once she’s positive Jason’s OK, Sam will insist on taking him home with her. General Hospital spoilers say a night of wine, grilled cheese sandwiches and memories will lead to erupting passion. GH fans can expect Jason and Sam to make love before the week’s over.

Before things get too hot, Carly Corinthos (Laura Wright) will hear the news of Jason’s latest chaos. It seems she’ll just make sure he’s not dying and focus on other matters. Carly’s got Joss and Mike Corbin (Max Gail) to deal with, so she’ll trust that Jason can take care of himself as usual. Even when he can’t, Sam’s always got Jason’s back.

Other General Hospital spoilers say Curtis (Donnell Turner) will summon Marcus Godfrey (Nigel Godfrey) for a chat. Stella Henry (Vernee Watson) may be the topic Curtis has in mind. Curtis only wants peace and happiness for his auntie, so he may think he can somehow help her out.

Stella will want to help Mike in Thursday’s scenes, too. He’ll mistakenly assume Stella’s getting married, so she’ll do her best to clear this up.

Of course, it won’t matter since Mike’s memory is getting worse and worse. His quick decline will force Sonny Corinthos (Maurice Benard) to face the facts. It’s just not safe to keep Mike at home any more. Turning Woods would be better equipped to handle Mike, so Sonny will plan to take his dad from part-time to full-time status.