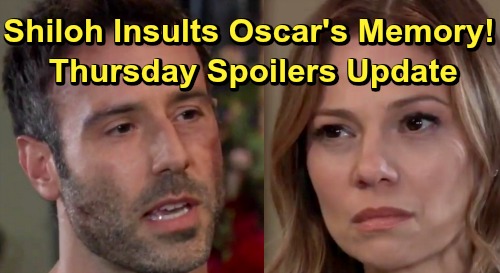 General Hospital (GH) spoilers update for Thursday, July 11, tease that Liesl Obrecht (Kathleen Gati) will get grilled by Franco Baldwin (Roger Howarth). He’ll bring up her cryptic comment about “Wiley Cooper-Jones’” real father and ask what she meant by that. Liesl will push Franco to just forget she said anything, but he’ll remain suspicious of what she’s hiding.

Over with Elizabeth Webber (Rebecca Herbst), she’ll also think Liesl knows more than she’s saying. Liz will talk to Lucas Jones (Ryan Carnes) about “Wiley” on Thursday, so she’ll be brought up to speed on all the Shiloh Archer (Coby Ryan McLaughlin) shockers. Since Shiloh is currently believed to be the real father, Liz and Lucas may guess that’s what Liesl was referring to.

Other General Hospital spoilers say Harmony Miller (Inga Cadranel) will be ready to spill all. At the PCPD, Harmony will insist she can tell Mac Scorpio (John J. York) and Robert Scorpio (Tristan Rogers) everything. Jason Morgan (Steve Burton) convinced Harmony to come clean about Shiloh’s involvement in Douglas Miller’s death, so Robert and Mac should get a stunning statement.

In lockup, Harrison Chase (Josh Swickard) will squeeze in a few private moments with Willow Tait (Katelyn MacMullen). He’ll be disheartened by Willow’s tough situation and an even tougher battle to take Shiloh down. Chase will hint that he’s losing faith in the justice system. He’ll be tempted to turn in his badge and take a job with Sonny Corinthos (Maurice Benard), but the law could be back on his side soon enough.

Relief will wash over Sam McCall (Kelly Monaco) on Thursday, so she may receive word of Shiloh’s looming arrest. Back with Willow, she’ll have to face her mother again. Harmony will be placed in the cell across from Willow, so they’ll get another chance to talk things out. Willow may be grateful that Harmony came around, but she’ll probably point out it doesn’t fix the past.

At some point during this conversation, Harmony will mention her roommate. Of course, GH fans know that’s Nelle Benson (Chloe Lanier). Harmony will drop that name into the conversation and perhaps set up a bombshell for later. Willow’s heart-to-heart with Harmony will be painful, but it could help her take a big step toward healing.

Across town, General Hospital spoilers say chaos will erupt at the Quartermaine mansion. Oscar Nero Quartermaine (Garren Stitt) was a trusting kid who got suckered by Shiloh at DoD. He left his ELQ shares to the cult leader, so that’s sure to cause major drama at this will reading.

Thanks to Julian Jerome’s (William deVry), Kim Nero (Tamara Braun) now knows Shiloh is a terrible human being. She’ll object to Shiloh getting anything at all from her beloved Oscar. Naturally, Shiloh will point out that this was Oscar’s dying wish. He’ll wonder if Kim really wants to second-guess her son’s choice.

Drew Cain (Billy Miller) won’t appreciate Shiloh’s arrogance, so he’ll get end up getting physical with him. Shiloh will lose his footing as Drew pushes him backward. General Hospital spoilers state that Drew will be awfully riled, so Shiloh had better watch what he says about Oscar!

Finally, Hayden Barnes (Rebecca Budig) will meet up with Hamilton Finn (Michael Easton). It seems Finn will want to clear the air, but Hayden won’t think that’s necessary. She’ll address their split briefly and suggest that they should leave it at that. Hayden will feel like they both need to move on with their lives.

However, Hayden’s keeping a huge secret involving Finn’s child. They’ve got some unfinished business between them, but there’s no word yet on when that big reveal might happen. Fortunately, General Hospital viewers can expect plenty of action in the meantime. We’ll give you updates as other GH news comes in. Stick with the ABC soap and don’t forget to check CDL often for the latest General Hospital spoilers, updates and news.