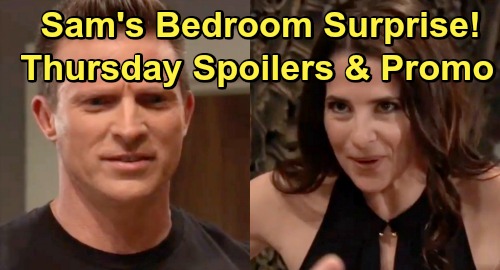 General Hospital (GH) spoilers for Thursday, July 18, tease that Willow Tait (Katelyn MacMullen) will have some good news to share with Harrison Chase (Josh Swickard). As GH viewers know, Willow just found out that Shiloh Archer’s (Coby Ryan McLaughlin) legal avenues to gaining access to Wiley Cooper-Jones have been obliterated. She’ll approach Chase as he’s fresh from a baseball game and give him the fantastic news.

Meanwhile, Sasha Gilmore (Sofia Mattsson) will have a big announcement of her own. She’ll happily tell someone that she’s moving out of Wyndemere. Sasha recently made the decision to stay in Port Charles permanently, so she might be looking for a place of her own. After all, she’s got some serious incentive to remain in the area, since she’s got a hot new relationship going with Michael Corinthos (Chad Duell).

Next on the new episode of General Hospital on Thursday, July 18, Jordan Ashford (Briana Nicole Henry) will make her way to the police station. She may feel like visiting her colleagues, but chances are she’ll want to see what’s going on with the various investigations underway at the PCPD. Jordan loves her work and just can’t stay away! She’ll check in with acting police commissioner Mac Scorpio (John J. York) to see what’s been going on.

While Jordan’s getting her updates, Curtis Ashford (Donnell Turner) will be meeting with Valentin Cassadine (James Patrick Stuart). Valentin will want updates on what Curtis has found with respect to his efforts to dig up information on Jasper “Jax” Jacks (Ingo Rademacher). Curtis might pass on the news of Jax’s hiring of Hayden Barnes (Rebecca Budig), which could pique Valentin’s interest.

It looks like Valentin will get a bit impatient and want more detail than Curtis has been able to turn up just yet. But Curtis will manage Valentin’s expectations, letting him know that he’s going to do the job right, not necessarily as quickly as Valentin thinks it should be done.

Other General Hospital spoilers indicate that Franco Baldwin (Roger Howarth) and Elizabeth Baldwin (Rebecca Herbst) will take a closer look at one of the photographs from their wedding celebration on The Haunted Star. It appears that the photographer managed to snap a shot of a mystery person in the background who might have been the person that pushed Liesl Obrecht (Kathleen Gati) overboard.

Of course, Franco and Elizabeth didn’t exactly believe Liesl about being pushed off the boat, but given the photographic evidence in hand, it looks like they’ll at least consider the possibility that Liesl was attacked.

Speaking of Liesl, she’s still cooped up in the hospital after her plunge into the water, and she and Nina Reeves (Cynthia Watros) will continue their discussion about Shiloh’s arrest and Willow’s involvement in DOD. As GH viewers know, Nina was shocked to discover that Shiloh was the father of the baby that Willow gave up for adoption, and on Thursday’s episode, she’ll start to feel responsible for Shiloh learning about Wiley in the first place.

Finally, on Thursday’s new episode of GH, Sam McCall (Kelly Monaco) will have a surprise for Jason Morgan (Steve Burton). It looks like Jason will show up at home to find Sam waiting for him. He’ll be puzzled as she tells him that there’s a surprise for him “in this bed,” and it may take some explaining on Sam’s part. Could she have passionate night planned for the two of them?