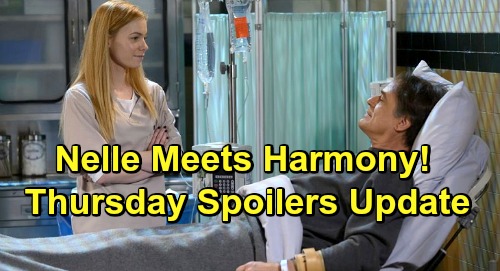 General Hospital (GH) spoilers for Thursday, June 13, tease that Nelle Benson (Chloe Lanier) will greet Ryan Chamberlain (Jon Lindstrom) and introduce herself. Ryan wondered if maybe he knew Nelle when she walked in the infirmary. He doesn’t know her personally, but he might’ve seen Nelle’s picture in the news or perhaps caught a glimpse of her during her brief stint at Ferncliff.

Whatever the case, Nelle will shake Ryan’s hand and learn a little about his predicament. Ryan may admit he was forced to give up a kidney without his consent. Nelle can relate, so that should spark a friendship. Ryan has committed more murders than Nelle, but she’s been known to get deadly. Nelle’s all about doing whatever it takes to get what she wants.

GH spoilers say Nelle’s escape plot is coming up, so will Ryan help her out with that? They’d be the perfect pair to blow this joint and cause chaos! However, Nelle will cross paths with Harmony Miller (Inga Cadranel) as well. There’s a chance Harmony will aid Nelle’s escape, but it’s worth noting that there’ll be some tension between them. They’d have to get past that hurdle first.

Incarcerated Harmony will also get a visit from Shiloh Archer (Coby Ryan McLaughlin) on Thursday’s new GH episode, June 13. She’ll hope he’s got a way out of her current legal jam, but he’ll insist he’s focused on finding his child. That’s the most important thing to Shiloh at the moment.

Of course, the most important thing to Sonny Corinthos (Maurice Benard) is making sure his loved ones are safe and as far away from Shiloh as possible. Sonny will let Brad Cooper (Parry Shen) know that “Wiley Cooper-Jones” is going to be protected. He’ll promise not to let anything happen to that little boy, but Brad will still be on edge.

Julian Jerome (William deVry) will do his best to provide reassurance, too. He’ll be more than willing to help if Sonny’s going to eliminate Shiloh. Julian is fed up like Sonny is, so they’ll join forces if it comes down to it. Meanwhile, Willow Tait (Katelyn MacMullen) will fear that “Wiley’s” identity will be exposed. She’ll hate the thought of Shiloh tracking the kid down and seeking custody.

Michael Corinthos (Chad Duell) will be there to hopefully quiet Willow’s concerns. He’ll note that Shiloh’s first step would be proving Willow actually had a baby. Michael may feel like Shiloh can’t get much further than that, but he’s clearly underestimating this cult leader. Shiloh has already scored the proof he needs and even found out the baby is a boy.

Back with Sonny, he’ll be taken aback when he spots Lulu Falconeri (Emme Rylan) chatting up a nice-looking man. Sonny will likely assume it’s a date, but he won’t know the whole story. Lulu indeed set up some dates on an app, but she’s not looking for love. She’s just trying to catch a thief and write an intriguing article.

Other General Hospital spoilers say Ava Jerome (Maura West) will suggest it’s all or nothing. Jasper “Jax” Jacks (Ingo Rademacher) can take Ava as she is and do the story her way or they can just skip it entirely. Nine Reeves (Michelle Stafford) warned Jax to fix this, so he probably won’t want to disappoint her. He may reluctantly do some mild groveling and get Ava to sign on the dotted line.

Carly Corinthos (Laura Wright) should be furious when she realizes Ava’s going to be praised as some sort of inspirational figure. She won’t approve since Ava’s free to do what she wants while Morgan Corinthos (Bryan Craig) is six feet under. General Hospital spoilers reveal that Carly will lash out, but Jax should be a calming influence as usual. He always knows just what to say.

It sounds like some gripping drama’s ahead in Port Charles. We’ll give you updates as other GH details emerge. Stay tuned to the ABC soap and don’t forget to check CDL often for the latest General Hospital spoilers, updates and news.