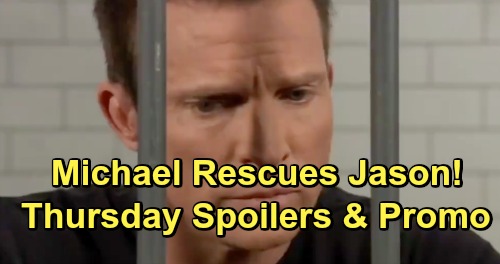 General Hospital (GH) spoilers for Thursday, June 27, tease that Bobbie Spencer (Jacklyn Zeman) will mention her family crisis to Epiphany Johnson (Sonya Eddy). There’s plenty to worry about between Bobbie’s diabetes diagnosis and the chaos surrounding “Wiley Cooper-Jones.” However, Epiphany will turn Bobbie’s attention to another problem. She’ll insist Bobbie needs to come with her right away.

While Bobbie tackles some sudden GH drama, Julian Jerome (William deVry) will want Alexis Davis (Nancy Lee Grahn) to be straight with him. He’ll ask what the chances are that Lucas Jones (Ryan Carnes) and Brad Cooper (Ryan Carnes) will keep their son. Alexis may keep insisting that coming forward is the best option. She’ll reiterate that “Brucas” will stand a better shot if they’re honest.

The trouble is Brad can’t be honest. This isn’t even Shiloh Archer’s (Coby Ryan McLaughlin) child! “Wiley” doesn’t belong to Willow Tait (Katelyn MacMullen) either, so will Julian finally let Alexis in the loop? General Hospital spoilers say Alexis will unleash her fury on Julian this Thursday, so that’s definitely an option.

Meanwhile, Sam McCall’s (Kelly Monaco) confrontation with Shiloh will continue. She just received a Jason Morgan (Steve Burton) text alert from Michael Corinthos (Chad Duell). Officer Billy Price (Jonathan Stanley) locked Jason up in Beechers Corners, which he happily reported to Shiloh. Once Shiloh gets off the phone, he’ll needle Sam about the power he has.

Shiloh will also hurl some Jason insults, which won’t go over well with Sam. She hates Shiloh with a passion, so she’ll lash out at the cult leader and make it clear that he won’t win. Sam won’t rest until Shiloh is behind bars or underground – whatever it takes to keep Shiloh from hurting innocent people.

Later, Sam will do Lucas a favor, which will undoubtedly tie in with “Wiley” somehow. She’ll do everything she can to make sure Lucas keeps his family intact. Back with Officer Billy, he’ll keep taunting Jason and assure him the book will be thrown at him. Fortunately, Michael will arrive to get Jason out of this jam. He can be a pretty powerful guy when he wants to be, so Michael will get a chance to play the hero and come through for Jason.

Other General Hospital spoilers say Kim Nero (Tamara Braun) will plead with Drew Cain (Billy Miller). He’ll maintain that he can’t have a baby with her, even if they don’t do it the old-fashioned way. Drew won’t think it matters how the child is conceived; the point is Kim is in no shape to have another kid right now.

Kim will beg Drew to just do this one thing for her. It’s all she cares about at the moment, but Drew will insist it’s not happening. A little later, Kim will make a significant choice that alters her fate. That choice will be to seek assistance from Shiloh, who’ll head over to her apartment by the end of the week. Kim intends to have a baby with or without Drew’s help!

General Hospital fans won’t want to miss Thursday’s exciting episode. We’ll give you updates as other GH news comes in. Stay tuned to the ABC soap and don’t forget to check CDL often for the latest General Hospital spoilers, updates and news.